Let the Music Live in Baltimore

What does it feel like to play an instrument?  For clarinetist Berginald Rash, he says,”It can only be described as pure joy. I’m most definitely nervous but that feeling takes a backseat to my excitement and joy, especially when playing such an exciting and fulfilling work like the Weber Quintet.” 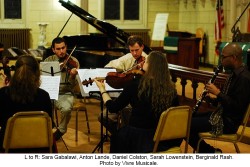 The pure joy of playing and listening to music is alive in Baltimore with Vivre Musicale, a non-profit chamber music group compiled of up and coming classically trained artists.

There are many non-profit musical groups but co-founder Jorge L. Toro says that what sets them apart is that “Most chamber music groups out there are exclusively for instrumental music. At Vivre Musicale we want to incorporate vocal and instrumental music. Unlike other non-profit musical groups we also collaborate with other mediums. In past concerts we have done a lot of art, photography, and writing (poems). This season, and in future seasons, we will collaborate with video, dance, acting. ”

Mr. Toro has hopes this marriage lasts a long time for he has big plans for his non-profit, saying, “We want to create a healthy following in the Baltimore/D.C. area. We would eventually like to take Vivre concerts all over the country. Berginald and I as Artistic Directors hope to travel to different music schools to listen and hold auditions for Vivre Artists. Our vision for the future is to also collaborate with different art organizations. Financially we want to be smart with our expenses by keeping costs low but at the same time providing great concerts! ”

Such a concert called “Something Old,” took place at the Mt. Vernon Place United Methodist Church in Baltimore on November 13, 2010.

Under the careful hands of pianist, Teodora Adzharova, Myngoe Brashears, countertenor firmly executed “Stille Amare” from Tolomeo by Handel.  Myngoe was able to show contrasting moments in the piece by going from passionate and mighty to thoughtful and tender.

The joy that Berginald Rash brought to the “Weber Clarinet Quintet” was infectious to both the musicians and the audience.

With talented musicians such as these,  music is indeed alive in Baltimore!

A conversation with co-founder and artistic director, Jorge L. Toro:

Q: What is your earliest memory of you singing?
A: I was in the 5th grade when I started singing. I joined my elementary school choir. I kept singing throughout middle school. I was accepted into the Dreyfoos School of the Arts for high school. Needless to say, I was in the Vocal Department.

Q: Who was the driving force behind you beginning piano lessons?
A: My grandmother. Her and her mother were both pianists and organists. Funny story: When my mom was growing up she (my grandmother) forced her to play the piano; my mom hated it. When my mom had my older sister, my grandmother forced her to play the piano too; my sister also hated it. Seven years later my twin and I were born. My grandmother gave up on piano lessons for her grandchildren until one day… I was walking past her studio in her home in Peru and I heard my grandmother playing the piano. I was around 4 years old. She saw how my face would light up when I heard her play. The rest is history!

Q: Describe your choice to have the soloists/choir by the organ behind the audience.
A: I wanted to utilize the WHOLE church. I wanted to get away from the stereotypical concert setting of everything being in the front. Mt. Vernon Place is such a beautiful and huge space; I didn’t want to leave anything out! I also wanted to give the audience a sense of euphoria by sitting facing forward and enjoying beautiful music from above.

A conversation with co-founder and artistic director, Berginald Rash:

Q: What or who inspired you to play the clarinet?
A: I originally played tenor saxophone in 4th grade but wanted to play the clarinet. It wasn’t until I moved to Georgia where I met some really stellar clarinetist that I really understood and felt propelled to pursue the clarinet. My first teacher, Mr. Edward Knakal of Virginia Beach, Virginia, was extremely instrumental in me developing and further fostering my love of music and the clarinet specifically. He introduced me to the beautiful playing of former Principal clarinetist of the Boston Symphony, Harold Wright, who’s musical voice still inspires me and serves as a guide and litmus test for my own playing. After studying with Mr. Knakal during high school I went on to study with Dr. Deborah Bish and Dr. Frank Kowalsky at Florida State University’s College of Music. Both teachers gave me so much. Dr. Bish took my raw talent and focused, honed, and refined its technical manifestation, providing me with consistency and stability. Demonstrating to me the benefits of a solid warm-up and structured practice time. Dr. Kowalsky helped me develop my voice and musical phrasing. He taught me how to take musical risks and impart nuance, style, and grace into every musical gesture and form. His tenderness, care, and absolute love for music and the clarinet proved infectious. After my undergraduate degree I went to University of Wisconsin-Milwaukee where I studied with Todd Levy, principal clarinet of the Milwaukee Symphony and Sante Fe Opera Orchestra. Todd took all of the foundation I had been given from high school through my bachelor’s and refined it, teaching me the power of pianissimo, the strength in smooth legato, and the resonance of supple round articulation. His unwavering standard of excellence and refinement continue to teach and inform my playing.

Q: How did you both decide to create Vivre Musicale?
A: During our undergrad Jorge and I were inspired to give a chamber music recital that featured our friends and colleagues in the College of Music. We titled it, “A Night of Romantic Works.” The time and care we took to craft the program, the recital posters, meet with the artists, and lay out the performance space, though challenging, was very encouraging for us. We enjoyed the hard work and the opportunity to showcase our hardworking friends who seemed to be overshadowed in a place filled with so many performers and performances.