Sweeney Todd: Up to the Challenge 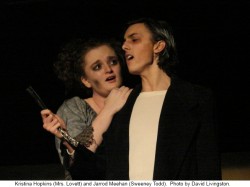 Eleanor Roosevelt once said, “You must do the thing you think you cannot do.”

The musical masterpiece, SWEENEY TODD by Stephen Sondheim, is challenging for even professional adult actors.  That’s why when you hear that a teen acting troupe is performing the piece, your ears perk up and wonder how they are going to pull this off!

The Drama Learning Center’s teen professional company called Teaching Young Actors is up to the challenge!

In a conversation with Director, Stephanie Lynn Williams, she said, “I would say that the biggest challenges are the complicated music, executing the technical elements of the deaths (disposal of bodies and blood effects), and the progression of Sweeney’s character. I was very lucky to have a great team working on this show to help with all of these. We began working on the music in early October, so we really tried to get the performers super-comfortable before we moved on to staging.

The challenge with Sondheim (as I’m sure you know) is the complex rhythms and the fact that the accompaniment is not always going to help you find your way (and in some cases will try to lead you off track). The performers have to be 100% confident in their songs because if they start to second guess themselves it can get off track pretty easily. Tiffany Underwood Holmes did a phenomenal job teaching the music and as we got closer to production we would just drill some of the more complicated sections to get them solid–particularly the ensemble ballads because each one is different rhythmically. Dan Van Why and Melynda Burdette (set and props design respectively) were instrumental in figuring out the effects. Dan was very passionate about the design for the show and had it figured out pretty early on. However it was very hard for me and the actors to visualize the dimensions of the set and the logistics of the turntable before it was up, so we had a small scale model built which was extremely helpful to me while I was staging the numbers.

Melynda had performed in Sweeney twice, most recently at Signature Theatre, so she had a great idea of how the blood effects worked and actually was able to borrow the razors from Signature. In regards to the progression of Sweeney’s character, I feel that is a huge challenge for any actor, much less a young performer. I was very fortunate to work with Jarrod on the role- we have worked together for many years and it has been a pleasure to see him evolve as a performer. We had several one-on-one sessions and many rehearsals with just Sweeney and Lovett. Each performance he allows himself to go further and further with the character, and it is just a huge accomplishment for him and amazing to watch. I am really proud of how each actor tackled this challenging piece.”

This production covered every angle in creating the best-possible show.  From a rotating set, costumes, wigs and make-up, special effects, live musicians, and even a dialect coach.

For actress Kristina Hopkins (Mrs. Lovett), one of the challenges was learning the accent.  She said, “I actually picked up the Cockney accent about three years ago by watching “My Fair Lady”. I watched the movie several times and I thought the songs were really fun, but the whole show was about Eliza’s accent, so you can’t really sing the songs if you can’t do the accent. But I also had a lot of help perfecting my accent after I was cast as Mrs. Lovett.

The entire cast had a dialect workshop with Red Branch Theatre Company’s Artistic director, Jennifer Spieler and my voice coach Stephen Deininger helped me to perfect my accent and make sure that it was consistent. Then, shortly before opening Jarrod and I met with our choreographer Jenny Male who listened to us individually to make sure that all the pronunciations were accurate. Because Americans aren’t used to hearing a Cockney dialect my director, Stephanie Williams, told me to change certain words and phrases for clarification. It’s a hard accent for Americans to learn, but it’s really fun to use!”

The Teaching Young Actors program at the DLC sets their standards high and very often achieves them, thanks to Stephanie Lynn Williams whose goal is “to provide teens who are serious about theatre with an opportunity to work in a professional environment.  We have very high expectations for them and push them to reach new heights with each production.  Each student must audition to get into TYA and then audition for each show.  Our main focus is on ensemble theatre–we never accept more than 30 students into TYA (typically less) so it is different from a high school show that may have upwards of 60+ cast members.  We also try to approach the class as a college prep course with discussions about dramaturgy, design, context of the piece, as well as audition preparation, jury days, etc.  Unfortunately because of the complexity of Sweeney we didnt get much time this session to work as much on these elements, but we do always provide feedback about past auditions and performances in each student’s one-on-one audition process.  Our hope is that we are giving our students the extra edge in their theatre careers as they approach college by providing them an outlet for creativity as well as an environment where they can be given honest answers about their progress as a performer.”

Everyone in the cast seemed to have their own special talent.  A stand-out singing voice was that of Peter Augustine (Beadle Bamford).  Peter, a junior at Mt. Hebron, delightfully played the role of Beade Bamford as if he had a smell under his nose.  His sweet-sounding tenor voice gets a chance to shine with the “Parlour Songs” and “Ladies in Their Sensitvities.”

Kristina Hopkins as the cheery and chatty shopkeeper seemed to be born to play the role of Mrs. Lovett!  Don’t be surprised if down the road you see her playing the role again!  In the theatre program, she said that she, “can’t describe what it’s like to play her dream role in her all-time favorite show.”

After her first performance, I asked her “Now that you have one performance under your belt, try and describe what it’s like.” She answered by saying, “I would play the role of Mrs. Lovett every day for the rest of my life! It’s exciting, and it’s the most fun I’ve ever had in any show I’ve ever been a part of, but it’s also really overwhelming and exhausting.

Mrs. Lovett is very eccentric and you can’t hold anything back, you have to just go for it. Sweeney Todd is a love story, a comedy and a horror story, which makes it very challenging because there’s such a wide range of emotions you have to portray. I watched six different versions of this show for inspiration, but I didn’t want to copy anyone. I wanted to make Mrs. Lovett my own. It’s a lot to think about when you’re on stage, but it’s nice to know that you have someone like Jarrod out there next to you to support you and back you up when you need it. We play off of each other a lot and he makes it really easy for me to do my job. Everyone in the cast and crew is incredibly supportive of each other and I’m so grateful that I have the opportunity to live my dream.”