Take Your Honey to See Beehive: The 60’s Musical 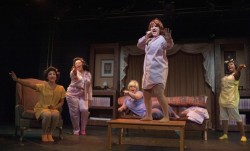 That, of course, is an example of the popular 60’s game, “The Name Game,” just one of the fun, or should I say, GROOVY audience participation gimmicks in Toby’s Dinner Theatre of Baltimore’s terrific, I mean FAR OUT, production of BEEHIVE: The 60’s Musical!

The plot is simple:  6 girls have a pajama party and sing songs from the 60’s.  Actress Crystal Freeman reminds us that “Childhood is a time no one appreciates until it’s over.” Turn back the clock to relive your childhood with 40 classic pop hits like “One Fine Day,” “My Boyfriend’s Back,” “Downtown,” and “Respect.”

One thing that I R-E-S-P-E-C-T about this production is the live band.  Just the fact that all the music is live is good.  But this band is way beyond good; in fact, it’s the best band I’ve heard yet at Toby’s Baltimore, thanks to the band members and the musical direction under Cedric Lyles.

Through the use of video, director Kevin McAllister takes us back to the 60’s, showing clips of Martin Luther King and the Civil Rights Movement, John F. Kennedy, and Vietnam all while presenting relevant songs, like “The Beat Goes On,” made famous by Sonny and Cher.

With all the national history presented, perhaps there was a missed opportunity to make the musical more meaningful by adding some local elements to the mix such as having the show set in Baltimore with some Baltimorese, like “Downey Ocean.”

At the beginning of the show, actress Crystal Freeman exclaims, “We want you to have a good time!” And a good time was had by people of all ages, including the actresses. During the “Come See About Me” song the girls playfully roll out their sleeping bag as if they are rolling out the red carpet.

To liven up the all-female cast, one lucky man during the show is chosen to go on stage and simply sit in a chair.  What happens next will make you giggle!

Everyone will walk away from the show with a favorite singer and song.  For some, Lauren Spencer Stolzfus and her rendition of “I’m Sorry” (oh-oh’s and all) will be a favorite. Or maybe your favorite will be Maria Egler crying in “It’s My Party.”

Shayla Simmons stops the show with “A Natural Woman,” made famous of course by Aretha Franklin. And be sure to listen for Debra Buonaccorsi’s “Will You Still Love Me Tomorrow” and Deborah Lubega moving and shaking like Tina Turner in “Proud Mary.”

Whoever is your favorite, I recommend taking your favorite honey to see BEEHIVE:  The 60’s Musical at the Toby’s Dinner Theatre of Baltimore!

Kevin McAllister is directing with Choreography by Ray Hatch, Musical Direction is by Cedric Lyles.

Performances are Thurdays through Sundays.  There are selected Tuesday and Wednesday evening and Thursday maintinee performances.  Doors open at 6 PM for evening shows (5 PM on Sundays) and 10:30 AM for matinees.