Bring Your Sweetheart to Toby’s 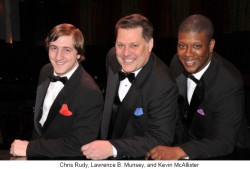 Singer Tony Bennett recently said in a video promo for his album, “The Ultimate American Songbook,” that “the end of the 20’s and into the 30’s and 40’s was a revolution in popular music that will never be topped.  It’s going to become our classical music…Not America’s classical music, but the world’s classical music.”

Songs from American composers like George and Ira Gershwin, Johnny Mercer, Duke Ellington, Irving Berlin, and Cole Porter are featured in a musical called, I LEFT MY HEART, A Salute to the Music of Tony Bennett now playing at the Toby’s Dinner Theatre of Columbia through March 6th.

The model for the cast is that of “The Three Tenors” phenomenon.  In this show, the three tenors combined form the multi-leveled stylings of the great American singer,Tony Bennett, most famous for his song, “I Left My Heart in San Francisco.”

Normally, before the show begins the host asks you to blow out your candle at your table.  This time the candles are asked to remain lit to help set the ambiance of an old supper club.  Adding to the setting is the placement of the band onstage.  Headed by musical director Douglas Lawler on the keyboard with Frank Higgins on the bass, Tom Harold on the Drums, and Tony Neenan on the Trumpet, the band plays a variety of familiar songs like “I Got Rhythm,” “The Best Is Yet to Come,” and of course, “I Left My Heart in San Francisco.”

Each of the three tenors brings his own flavor to the mix.  The youngest of them all, Chris Rudy kind of looks like a young Tony Bennett.  More important, Chris really possesses Mr. Bennett’s charm and vitality for life.  Lawrence B. Munsey projects a mature and sophisticated sound, while Kevin McAllister sings the notes between the notes with his smooth and stylish voice.

Between songs, audiences will hear short stories and anecdotes about the life and career of Tony Bennett.  One lucky lady will even be pulled from the audience to sit on a stool and be swooned by the three handsome men.

With February being the month of Valentine’s Day, with all the romantic songs to help put you and your date in the mood, I can’t think of a more special evening than to spend it at Toby’s Dinner Theatre and their production of I LEFT MY HEART, A Salute to the Music of Tony Bennett.