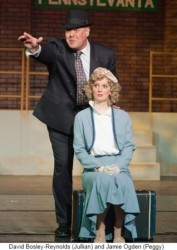 42ND STREET, the tap-dancing backstage musical set during the Great Depression, is making audiences happy at the Toby’s Dinner Theatre of Baltimore.  It is 1933 and Prohibition had just been repealed.  The story follows the “young and healthy” Peggy Sawyer (Jamie Ogden) and her rise from chorus girl to lead actress. All of which happens during the rehearsals for the production of PRETTY LADY, directed by the famed Julian Marsh (David Bosley-Reynolds).

On the surface the story is pure fluff, but Toby’s production under the direction of Tina DeSimone provides a more realistic approach to many of the performances, creating a stark contrast between the backstage scenes and the melodramatic musical numbers. Jamie Ogden had all the right dance moves and enough vocal power to pull off being the female lead, Peggy Sawyer.  Playing the role more natural than melodramatic, her character offerred more insight to “making it” on Broadway all while being modest as when she said to Julian that she was thankful to be “a speck of dust in your show!” Besides being the director and choreographer, TIna DeSimone is also in the cast playing the role of Maggie Jones, one of the writers and producers of PRETTY LADY. Tina is able to let loose and be funny in her side-splitting, melodramatic version of “Shadow Waltz.” But her performance wasn’t limited to just a few laughs here and there. Her character was solid, but most important she was fun to watch! Without missing a beat, the talented ensemble at Toby’s tapped their hearts out to memorable tunes like “We’re in the Money,” “Lullaby of Broadway,” “Shuffle Off to Buffalo,” and of course “42nd Street.” Ensemble stand-outs include Gabrielle Sullivan and Jordan Klein who both not only danced and smiled, they also had enough charisma to help chase away those Depression blues.

With many high-level jobs going to younger people these days, audiences are able to relate to diva Dorothy Brock (Lynne Sigler) losing her job as leading actress to newcomer Peggy Sawyer. The song “Young and Healthy,” performed by Billy Lawler (David Jennings) and Peggy, further demonstrates the value put on the youth.

Costume designer Lawrence B. Munsey provided little touches of symbolism as in the use of Peggy’s yellow lucky scarf which happened to be the same color as Billy’s yellow sweater. Billy did bring Peggy luck since he helped influence director Julian Marsh to give her a job. Peggy is also seen wearing mainly shades of blue in contrast to other characters that wear mainly brown and gold.

Toby’s is known for always having live music, that is why I was disappointed to learn that the music accompaniment was recorded.  With that said, the recording featured a large professional band and was never overpowering to the live vocals. A recording is also preferred over the sythesizer-like “OrchExtra” which is often clunky and out of sync with the singers voices.

42ND STREET and its songs are timeless and toe-tapping.   So shuffle off to Baltimore and catch the show before the train leaves the station.

Performances are Thurdays through Sundays.  There are selected Tuesday and Wednesday evening and Thursday maintinee performances.  Doors open at 6 PM for evening shows (5 PM on Sundays) and 10:30 AM for matinees.