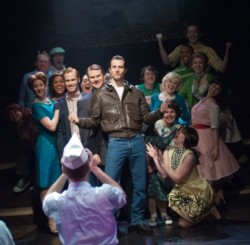 Based on the popular TV show, HAPPY DAYS, this lively musical version at Toby’s Dinner Theatre of Columbia is as sweet as a strawberry milkshake with lots of whipped cream!  Toby Orenstein and Shawn Kettering’s direction complete the production by adding their own “cherry on top” moments to make this a family show that is good until the very last slurp!

Familiar characters like the Cunninghams, Potsie, Ralph Malph, and Arthur “The Fonz” Fonzarelli sing and dance to orginal songs by Oscar-winning composer Paul Williams, most known for writing the song “The Rainbow Connection” made famous by Kermit the Frog and the lyrics to “The Love Boat Theme.”

Incidentally, in the TV show version, actor Scot Baio (Charles “Chachi” Arcola) was discovered by producer Gary Marshall while watching the film BUGSY MALONE which was composed by Paul Williams.

While none of the tunes are up to the quality of his hit song “Evergreen” from THE WAY WE WERE, the songs “Heartbeat,” “Message in the Music,” and “Maybe It’s Time to Move On” all provide a beat that will keep you swaying and lyrics that are heart-felt and happy.  After all, this is HAPPY DAYS!

The story is set in Milwaukee in 1959, Arnold’s drive-in malt shop is in danger of demolition. The gang teams up to save their favorite hangout by having a dance contest and even a wrestling match with the Malachi Brothers.

The book by Gary Marshall satisfies audiences by including all the catch phrases from the original show, like “The Fonz” saying “(h) eyyyyy,” Richie Cunningham exclaiming “Sit on it, Potsy,” and Chachi saying, “Wah, wah, wha!”

The actors don’t mimic the actors from the TV show.  Instead, they take the main characters attributes and then make the roles their own.

Greg Twormey as “The Fonz” is as handsome as a soap opera actor and as cool as a rock star.  Greg is able to be subtle with his humor, even while supernaturally turning on a coin-operated juke box with his fist or getting the attention of girls by snapping his fingers.

Fonzie’s younger cousin, Chachi who wears the red bandana around his leg is played by the lovable Chris Rudy who was last seen on Toby’s stage in “I LEFT MY HEART: A Salute to the Music of Tony Bennett.”

Jamie Boyle with his innocent boyish looks, complete with red hair embodies the spirit of Richie Cunningham while Toby’s regular Jessica Lauren Ball as Pinky Tuscadero has vocal cords that are pleasing to the ear.

The rest of the cast, including the ensemble, did whatever it took to entertain, including wearing roller skates while balancing hamburgers on a tray, dancing with toilet plungers, and even a half dozen or so of them dressing up as Marilyn Monroe, James Dean, and Elvis!

Toby’s formula for laughs works, since in her production she didn’t forget that beyond the humor, there is heart to the story and the characters.

For those wondering, the “Happy Days Theme Song” is in the show!  A nice variety of vocal arrangements make their way throughout the production.  I promise that you will find yourself singing the song for a few weeks if you choose to see the show!

The fact that theatregoers are devouring the show like one of Arnold’s hamburgers is a sign that audience’s are happy with HAPPY DAYS!

There are evening and matinee performances at Toby’s. The doors open at 6:00 PM for evening shows (5:00 PM on Sundays) and 10:30 AM for matinees. Reservations are required. Group rates, custom and children’s gift certificates are available.