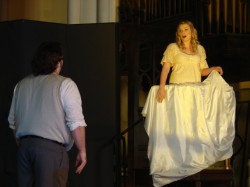 William Davenport as Romeo and Jennifer Edwards as Juliette. Photo by David Livingston.

It seems fitting that the heavenly voices from the Chesapeake Chamber Opera are heard echoing throughout the historic Memorial Episcopal Church in Bolton Hill.

This season general director, Beth Stewart decided to change the format from concert opera to staged productions including costumes, sets, and lighting.  This organization, originally called “Chesapeake Concert Opera,”  has kept their main philosophy of showcasing up-and-coming talented singers from the Baltimore-Metro area.

One of those talented singers is William Davenport who made a strong Romeo in their February production of “Romeo et Juliette.”  I most recently heard Mr. Davenport sing to an enthusiastic crowed at the “Opera Greats” concert at Temple Oheb Shalom with the Concert Artists of Baltimore.  His voice is exhuberent and he has the beginnings of good stage presence.  An artist is never finished learning and improving and I would like to see him work on building his voice and performance to the climax of each musical piece, much like building a house from the bottom brick by brick.

Jennfier Edwards as Juliette has a powerful voice combined with passion.  Sometimes her voice comes in too strong too much, instead of allowing herself to be vulnerable and subtle which was missing from both her voice and her character.

The Chesapeake Chamber Opera isn’t short on showcasing talented singers.  Terrance Brown as Count Capulet, Jeffrey Tarr as Frere Laurent, and Brent Reilly Turner as Mercutio all brought life to the stage in both their singing voices as well as their characters.

What I miss about this organization changing their format from concert opera to staged productions is the “less is more attitude.”  Before the singers could just focus on learning and executing the music.  Also, the audience could just relax and enjoy a dignified, simple concert.

Now audiences are distracted by stage lights that aren’t set up properly along with lackluster sets and costumes.  One set piece that was executed well was the bed.  The bed was designed so that the actors could be seen.   This was done by having the bed mattress up on its side so that Romeo and Juliette essentially walked into bed. The pillows and bedsheets were attached securely to keep it from falling.  The effect was impressive.

With a stage production I would expect to have more than just a piano accompaniment.   Still, a single live piano is much better than having a recorded accompaniment!  It should be noted, however that pianist Matthew Ganong held the show together along with Rolando Sanz as the conductor.

Producing stage productions raises expectations, which isn’t always a bad thing.  Of course some of the production issues are just growing pains and can easily be mended with more experience and a bigger budget.

Show your support of opera in Baltimore by attending the Chesapeake Chamber Opera’s production of Wolfgang Amadeus Mozart’s DON GIOVANNI at the Memorial Episcopal Church this weekend.

Below is a video featuring highlights from ROMEO ET JULIETTE.