Theatre Review: ‘A Time to Kill’ at Arena Stage

In the dog days of summer in a muggy Mississippi courtroom in rural Ford County, the chilling details of Pete Willard’s confession to the recent rape and torture of Tonya Hailey, a 10-year old black girl, are read by the judge.  At the pre-trial hearing the father of the child, Carl Lee, stands stoically in attendance, as the twisted brutality of the heinous crime is revealed.  Willard and his drug-dealing redneck crony, Billy Ray Cobb, are the accused.  Their yellow Ford pickup with the Confederate flag mounted on the back, was spotted at nearby Lake Tutula.  With a signed confession in hand and the victim clinging to life, it’s all but a slam dunk for the prosecutor, until Carl Lee guns down the defendants in cold blood and the air is sucked out of the theatre by the sound of gunshots. 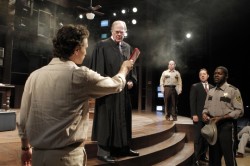 It is the first of Grisham’s crime novels to be brought to the stage and Tony Award-winning scriptwriter Rupert Holmes’ adaptation is certain to be considered a classic along with successful courtroom dramas like 12 Angry Men and Inherit the Wind.

Though the powerful story is set in the post-Civil Rights era of the South, nothing much has changed in rural Mississippi.  Director Ethan McSweeney does much to evoke the period with haunting visual and musical references.  The sound of Bluegrass, suggestive of the filmDeliverance, intertwines with echoes of “We Shall Overcome” heard beneath the courtroom windows.  Walls dotted with ‘50’s era television sets showing scenes of fiery Klansmen spewing racist hatred are layered with the chilling sounds of a child screaming “Daddy! Daddy!” Interspersed with flickering static-filled TV images, DC news anchor, J. C. Hayward, plays the role of Felicia Albright trial reporter.

As further mood-enhancement, Set Designer James Noone’s clever layout rotates the stage morphing it from a courtroom into the home-under-Klan-siege of the Brigance family, and back again.  Lighting Designer York Kennedy boosts the somber mood with the blades of a ceiling fan casting spinning shadows across the courtroom floor. The only thing missing is the aroma of buttermilk fried chicken and a Mississippi mud cake wafting across the stage.

In one particularly effective staging device, Director McSweeney has Judge Noose (an ironical name not lost on Carl Lee), D.A. Buckley and Defense Attorney Brigance face the audience to make their respective cases, giving the audience the eerie sense that they are involved in the deliberations.

But as with real life there’s also levity amidst the tension, enough to allow the audience, who’ve been gripping their seats, a chance to breathe.  Southerners can find humor in a funeral and, true to Grisham’s original novel, it’s reflected here.

John C. Vennema crafts the charming Hawaiian-shirted, bourbon-swilling down-and-out attorney, Lucien Wilbanks, whose metaphors, “whiter than an albino mouse in a snowstorm”, are pure down home.  But it’s Dion Graham in the role of the 46-year old Vietnam vet, Carl Lee Hailey, who will rip your heart out with his graceful, understated portrayal of the grieving father.  “God had a son,” he ironically observes, “He didn’t have a daughter!”

Here’s my verdict.  A Time to Kill is a raw and riveting drama that sears with redemptive emotion. It is a tremendous hit for Arena that should send this production straight to Broadway.

A Time to Kill plays through June 19th at Arena Stage in The Kreeger – 1101 Sixth Street, SW, inWashington, DC. For tickets call (202) 488-3300, or purchase them online here. The Running Time is approximately 2 hours and 30 minutes, including one intermission.