George and Martha: Tons of Fun at Imagination Stage

Hip-Hippo Hooray for composer, lyricist and book writer Joan Cushing who returns to Imagination Stage with her funny, rhythmic, heart-warming and charming musical George and Martha: Tons of Fun, which ends its run this weekend. The show is truly tons of fun! 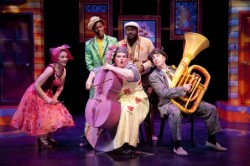 Based on James Marshall’s children‘s books about two hippo best friends (who may remind adults of the verbal-sparring leads with the same names in a famous Edward Albee play), Cushing fills her adaptation with lots of humorous scenes, including a funny workout with Dog and George and a cuckoo clock from hell that won’t stop ticking loudly. Cushing also pays homage to several Broadway musicals including two of Stephen Sondheim’s best works – Sweeney Todd andSunday in the Park with George – in addition to Gypsy and Cabaret.

Director Kathryn Chase Bryer guides the wonderful performances of the brilliant cast of young actors and hoofers who dance and sing their hearts out. Imagination Stage regulars Michael John Casey and Sandra Lee Murphy are hysterical as George and Martha. Their facial expressions and bickering made the audience roar with laughter.

Who are these two hippos? George is a jokester and a dreamer who plays the tuba – he wants to be the first of his species to fly – and when he tries to take flight “Like Orville and Wilbur Wright”, he fails to get off the ground. Martha takes ballet lessons in a very  pink tutu, plays cards with George, loves to go on picnics, plays the cello, and tells scary stories at night. Although their friendship has its ups and downs – many times because of misunderstandings (like assuming George likes Martha’s split pea soup which George despises: “It looks like buggers to me!”) – they still make beautiful music together.

The audience was wall-to-wall school kids when I saw the show, and Joan Cushing’s clever book allowed for copious of audience participation. Once, the whole theatre exploded with the sound of tots trying to get Martha to look down and smell the (fake) tulips. But there was one line that got the adults in the audience – including myself – roaring. Martha is at home reading Who’s Afraid of Virginia Woolf? when she says, “This is the funniest play I have ever read!” It cracked me up!

Joan Cushing’s ‘Oom-pah-pah’ score is filled with accordions and Martha and George’s favorite instruments – the cello and tuba. Among my favorites was “The Split Pea Soup Song,” which was side-splitting. “Plastic Flowers for Sale” with Nicholas Vaughan (Croc) sounding a lot like Pirelli the elixir-selling Barber in Sweeney Todd. The toe-tapping “The Secret Club” was not a secret for very long and had a hilarious and clever use of a subpoena, a notarized letter, and a habeas corpus. “The Autumn Song” was simply lovely.

And as many children’s productions often do, George and Martha: Tons of Fun teaches children – and hopefully some adults – the importance of friendship and communicating your honest feelings. As I was leaving the theatre I heard a youngster say to a friend, “I apologize for not telling you how I really feel,” Now that’s the power of the theatre!

The running time is 90 minutes with no intermission.