Set in the 1980’s in a fictitious African country that’s on the verge of civil war, Tom Stoppard’s Night and Day largely concerns three journalists for The London Globe who’ve been invited to the home of an expatriate mining engineer for an unknown purpose. Sensing a scoop, they all show up one-by-one and play along with their benefactor as it becomes increasingly clear that they’re being used to help broker an unlikely peace agreement. Occasionally, delving head-long into heady commentary on the nature of making news in a war zone, the play’s backdrop of Cold War intrigue may be dated, but just about everything else remains just as relevant today in an age of upheaval amongst totalitarian African states. 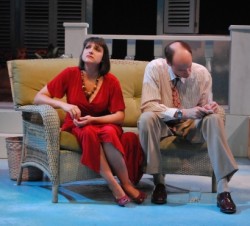 A former journalist himself, Stoppard’s garrulous script is exceptionally clever in its structure, neatly introducing an unlikely number of subplots that are all wrapped up by the play’s end, and is delivered with a nearly non-stop energy by director Kasi Campbell’s sizable ensemble cast. Actors Daniel Flint, Jim Jorgensen and Tyler Herman shine as the three Globe journalists, each of whom have a radically different take on the responsibilities of covering the impending war. But it’s Abby Wood’s portrayal of the mining engineer’s lonely, attention-starved wife that provides a much needed lightness and wit to a panoply of otherwise extremely serious and dark themes concerning war. Chuck Young’s late appearance as the fictitious country’s conniving despot, Ginku Mageeba, calls to mind a less provincial version of Forest Whitaker’s Idi Amin in The Last King of Scotland, and perfectly rounds off the show.

The Black Box Theater was seemingly designed to be as intimate a performance setting as possible. Its stage juts well into the middle of the room and is surrounded on three sides with seating; an ideal set-up for Night and Day, as the play’s characters are nearly constantly running on and off the set. Those fortunate enough to get front row seats will feel as if they are on the stage with the actors, and must be mindful not to trip the actors as they run by. And while the show is a bit lengthy, Night and Day is still well worth the admission, and comes highly recommended as a well produced, well acted and well staged performance of a modern master’s earlier works.

Produced by the Washington Shakespeare Company, Night and Day plays through July 3rdat Artisphere’s Black Box Theater, 1101 Wilson Boulevard in Arlington, VA. For tickets call (888) 841-2787, or purchase them online. Running time is about 120 minutes with an intermission.