No curtain divides the stage from the audience at the Shakespeare Theatre Company’s production of Harold Pinter’s Old Times. Upon entering the amphitheater, one has no choice but to consider Walt Spangler’s Spartan and clinically white set-up – reminiscent of Kubrick’s space station in 2001: A Space Odyssey – well before it’s populated by the deceptively complex play’s characters. Ostensibly the story of a long-married couple putting up a visiting old friend for the night, the three quickly begin regaling either other with stories from their distant and shared past. But as their individual recollections begin to increasingly contradict one another, the more the nature of the friend’s visit, the couple’s marriage and even the reality depicted on stage become called into question. 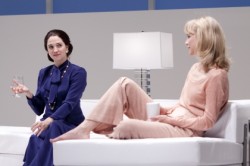 So unfortunately rare does one have the chance to see Pinter’s work come to live on stage outside of paperback retrospectives, so I highly recommended if only to see for yourself why the playwright remains deserving of having coined the adjective ‘Pinteresque’. Canonized by the Nobel committee in 2005 (a mere three years before his death at the age of 78), his trademark calling card—the pregnant pause—makes multiple appearances throughout, and should surprise those unfamiliar with the technique for how effective he was in saying so much by having his characters say literally nothing at all.

By no means an easily accessible play, Old Times presents daunting challenges for production teams looking to relating its cerebral themes of memory and truth in an engrossing way. Its three and only characters don’t do much other than lounge around while telling each other stories that are even abruptly acted out at certain points, as if vividly flashing to the surface of a character’s mind like an old memory. Thankfully, Director Michael Kahn’s solid ensemble cast breathes life into their alternatingly abstract and psychologically taut material by nailing their character’s eccentricities.

The husband Deely, expertly portrayed by Steven Culp (of “The West Wing” and “Desperate Housewives” fame), is shown as an overworked and over-traveled businessman who seems to be deeply unsatisfied with his station in life and seeks to amuse him by provoking others. Deely’s wife Kate, gracefully and demurely played by Tracy Lynn Middendorf, is shown to be the consummate pampered housewife whose one daily chore (other than taking strolls) is overcoming ennui. Kate’s friend Anna, convincingly played by Helen Hayes Award winner Holly Twyford, delights as an officious and prim counterbalance to Culp’s combustibility and Middendorf’s aloofness.

The production’s only significant slight can be found is its American actors’ affected British accents. It’s understandable that the Shakespeare Theatre Company would aim for authenticity and stress the source material’s explicit references to locations in England, but often do they not come across as completely genuine and may distract theatergoer who have discerning ears. Nonetheless, the experience of seeing Old Times is a thoroughly enjoyable one and will undoubtedly leave you grappling for clues in seeking answers to its seemingly magical realist ending. For large groups attending the play, this production is bound to provoke lengthy discussions regarding the truth behind each of its characters’ cryptic pasts.

Old Times plays through July 3rd at The Lansburgh Theatre, 450 7th Street NW, in Washington, DC. For tickets call 202-547-1122, or purchase them online. The Running Time is a about 90 minutes with an intermission.