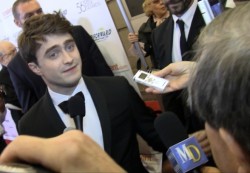 Drama Desk Award Nominee and presenter, Daniel Radcliffe (How to Succeed in Business...) being interviewed by Joel Markowitz on the red carpet.

The hilarious new musical, THE BOOK OF MORMON, the toe-tapping revival of ANYTHING GOES and the London export WARHORSE galloped its way to major wins at last nights 56th Drama Desk Awards ceremony which was held at the Hammerstein Ballroom in Manhattan Center in NYC.

Joel Markowitz and Mark Beachy were in the Big Apple hobnobbing with the elite of the NY theatre community on the red carpet and in the press room.

Tune in tomorrow for our interviews with last nights winners, Bobby Cannavale, Norbert Leo Butz, Brian Bedford, John Larroquette, Robert Lopez, Adam Mathias, and John Leguizamo. Derek McLane, whose set design for FOLLIES can now be seen at the Kennedy Center, and Helen Hayes Award Winning director Joe Calarco also stopped by to talk about his talented ensemble in the a cappela musical  IN TRANSIT who later in the evening received a special ensemble award.

This year the nominators chose to bestow special ensemble awards for acting to the casts of two shows. Therefore, individual cast members for these shows were not eligible for acting awards in the competitive categories.