For those of us who have been begging the Universe to send a rock musical that actually rocks, we are suddenly granted not one, but two: Amphion and The Terrible Secret of Lunastus. Both original rock musicals are playing in Baltimore Rock Opera Society’s Double Feature at Showtime Theatre. 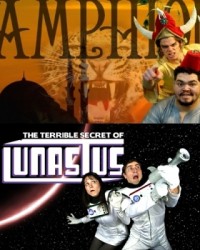 The Baltimore Rock Opera Society, or BROS, is an all-volunteer company dedicated to developing new works of rock theatre. The organization has taken on the Herculean task of transforming the old Showtime Theatre movie house into a Rock Palace, bringing together gifted artists from every area of music, dance, visual art and theatre production.

In his program note for Amphion, the first rock opus of the night, director Ryan Brown notes that he and the creators chose to be historically accurate only when “convenient.” Conveniently, most of us in the audience had little knowledge of the Byzantine Empire in 527 CE, we simply came to get our faces rocked off.

And rocked off they were!

Writers Dylan Koehler and Aran Keating have composed a rock score that ranges from an infectious Bolly-rock dance groove in “Amphion’s Ballad” to the legit screamo of “In Blood” (the cherry on top of this musical, performed passionately in the 11th hour by Weisz and Mark Miller as Bozorgmir). Brown makes prime use of the cavernous theatre space in his staging. Combined with the squealing sounds and the heat of the venue, the raw energy of the performers creates an excitement that must have been present in the air of Jesus Christ Superstar’s fledgling performances. The audience was so rowdy at times that it seemed like part of the show – that is, until one fearsome band member chastised the entire audience to “pipe down.”

Adam Endres gives a standout performance as Amphion, evoking memories of Freddie Mercury circa 1985 with a silvery rock tenor and playful charisma. He is well matched by Melissa O’Brien as Nasree, who not only brings the apparent technique of a classical actress, but builds to the single greatest female rock-out moment of the entire night.

In The Terrible Secret of Lunastus by Chuck Green and Erika Patoka, the music treads closer to musical theatre’s definition of rock, but the show is twice as much fun with three times as much spectacle. The plot is a little complicated. A simple description is that it’s a bit like Gilligan’s Island in outer space. Future Earth is threatened by a collision with the moon, and four quirky human astronauts explore the planet Lunastus in search of a new home for mankind. A terrible secret is revealed on Lunastus. No spoilers here – in part because I didn’t fully get it. I think it might have had something to do with The Bible. No matter. There were lasers. It was cool.

All four lead actors are uniquely dynamic as the astronaut crew: Tim Olewnik as the swaggering Captain Paul; Barbara Zektick as the accented scientist Vera; Christopher Krysztofiak as nerd-with-a-heart-of-gold technician Jules; and especially bubbly Sarah Levin as the psychologist Allison. Lily Susskind steals the show as Android with a physical performance so convincingly animatronic that drunken audience members were compelled to shout “best robot ever!” through much of the evening. As the alien Ionos, Corey Hennessey hits the vocal pinnacle of the night with his electrifying performance of “Ionos’ Ballad.

Patoka’s pop-rock score has true ear-worm potential, most notably in her song “Like A God.” Director Chuck Green leads a remarkably creative production team; most particularly an army of prop and costume designers who create a world of green aliens, dancing red vegetation, floating jellyfish-like puppets and a “Mother Nog” creature that effectively engulfs the entire stage. The final laser battle scene alone is worth the price of admission.

Problems are few in the BROS Double Feature. The venue is in dire need of air conditioning for the summer months ahead, and hopefully some generous donor will grant this worthy company a sound system upgrade in the near future (you have to sit in the front row to appreciate the glorious vocals of Amphion’s Rock Choir, directed by Moira Horowitz). Be advised that the night is “epic” in every way – the entire evening clocks in at approximately 4 hours, though each individual musical would make for a satisfying evening in itself. If you’re hungry for original rock theatre, however, it’s well worth the long haul.

The Bros Double Feature: Amphion and The Terrible Secret of Lunastus plays through June 12 at Showtime Theater – 9 West 25th St., in Baltimore, MD. Tickets available at the door one hour prior to performance on show dates, or purchase them online.

The Running Time is 4 hours with one intermission.