The Wild Party at Teatro101

I admit it. Whenever I head into dark Baltimore warehouses for vaudeville-era musicals, I put on my night vision goggles and start looking for the glow in the dark talent. After about fifteen minutes of Teatro101’s production of Andrew  Lippa’s The Wild Party, directed by David Gregory, I was ready to take them off. These guys deliver. 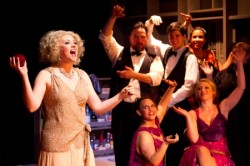 Queenie (Jamie Eacker) and the cast of The Wild Party (Photo: Ken Stanek)

The bad news: The production of The Wild Party has one more night left. The good news: it looked like the seats were full, and there was talk of a possible added show. So I’ll focus on getting the word out.

There’s nothing all that dazzling about the plot of the The Wild Party. Based on a poem by Joseph March about theroaring twenties, it’s chock full of late twenties archetypes. A passionate relationship. A wild party. A speakeasy. Bathtub gin. A real bathtub. A romantic triangle. A loaded pistol.

The central character is Queenie (Jamie Eacker), a vaudeville dancer with wandering eyes. Her lover, Burrs (Kevin McAllister) is a temperamental clown. Kate (Coby Callahan) is the aging flapper with eyes for Burrs. And Black (Michael Robinson), who loves women for what they are, is attracted to Queenie.

Instead of trying to use this to create another four-sided romance, it seems Andrew Lippa is itching to break through the romance and enjoy the party itself. Teatro101 gives him every opportunity to do that. In an evening of professionally controlled chaos, the Teatro ensemble squeezes this party and this story for everything it’s worth. If you don’t believe me, sit around and enjoy the intermission. The physical and emotional bonds between the so-called “supporting actors” are strong enough to give them the opportunity to stay on stage and improvise their way through a twenty minute break.

With “Look at Me Now,” Kate (Coby Callahan) grabs the spotlight as the self-appointed life of the party. Ms. Callahan offers a powerful punch while treading the line between floozie and flapper. As Madeleine True, a predatory, overweight and over-the-top lesbian, brings down the house with “An Old Fashioned Love Story.” In “Two of a Kind,” regular broad Mae (Erin Confair) and pugilist Eddie (Jimmy Heyworth) offer a strangely charming discourse on what makes relationships last.

Then there are the two major characters. They don’t disappoint. As Queenie, Jamie Eacker keeps her character on slow-burn. Under the flapping eyebrows and layers of makeup cake is a woman who’s ready get whatever she wants using whatever it takes. McAllister, meanwhile, takes the clown figure to its goofy, predatory, childlike, and abusive extremes. As Black, Michael Robinson is burdened with being the straight man for the party – as Queenie’s ‘sensitive’ lover – but he does the job well.

In the end, “Party” pretty much sums it up. This isn’t a musical; it’s a blast. An energetic and talented ensemble – aided to no small degree by Katie Harrington’s perpetually flowing choreography and Jess Harrison’s magically transformational sets – keeps it rocking, even during the intermission.  And there are no hangovers.

The Wild Party ends its run on May 28th at Teatro101 at the Mobtown Theatre in the Meadow Mill building, in Hampden, in Baltimore, MD.