A Little Night Music at the Audrey Herman Spotlighters Theatre

“Marriage isn’t one of the easier relationships.” This line, uttered by Fredrik Egerman (played by Will Emory) in the second act, sums up the storyline of Stephen Sondheim and Hugh Wheeler’s musical A Little Night Music. Now running at the Audrey Herman Spotlighters Theatre in Baltimore, A Little Night Music features the classic Sondheim sound in a story that Director Fuzz Roark calls “strangely sweet.” 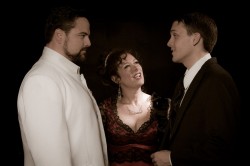 A Little Night Music tells the story of the entanglement of three families: the Egermans, the Armfeldts and the Malcolms. Widowed lawyer Fredrik Egerman (Will Emory) is just shy of his first anniversary with his 18 year-old second wife Anne (Laura Kavinski).  Although Anne idolizes her much older husband and brags about having a “husband who spoils me shamelessly,” she is afraid of making love to him and remains a virgin. After attending a performance of his former lover Desire Armsfeldt (Michele Jenkins Guyton)’s latest show, Fredrik visits Desire in her dressing room, rekindling their former romance.  Unfortunately, Desire’s other lover, Count Carl Magnus Malcolm (Jimmy Heyworth) is very possessive of his mistress and will not give up Desire without a fight.  Once the secrets of these lovers are made public, the characters are forced to decide who in their lives are worth fighting for.

Will Emory and Michele Jenkins Guyton’s chemistry as Fredrik and Desire is apparent from the first moment the two lock eyes onstage during the song “Remember.” There is electricity between these two that does not fade throughout the show. The character Anne is very much a child playing the grown-up role of a wife. Laura Kavinski portrays Anne to a tee, as she flits across the stage in a pretty dress in one scene but then spouts high-pitched wails at the news of her husband’s infidelity only minutes later. Jeffrey Coleman plays Fredrik’s adult son Henrik, a student home for a visit from the seminary, and does well with portraying Henrik’s awkwardness towards women, but it is extremely hard to decipher what he is speaking his lines.

Meghan Fluke is charming as Desire’s daughter Fredrika, and Desire’s mother Madame Armfeldt (Suzanne Young) is a font of knowledge who is constantly offering her granddaughter lessons on life, such as “Never marry or dally with a Scandinavian -they’re all insane.” Jimmy Heyworth was every bit the military leader when he addresses his adversary Fredrik.

Two shining stars in the performance are Coby Kay Callahan and Angela Sullivan.  Callahan’s portrayal of the lusty maid Petra is superb, and she offers the right mix of sensuality and vulnerability. As the naughty number “The Miller’s Son” draws to a close, there is pain in Callahan’s eyes as Petra spies her secret love in the arms of another woman.  Sullivan’s Countess Charlotte Malcolm is spectacularly sassy, as sarcastic comments drip from her lips. But like Petra’s character, Charlotte is not as strong as she thinks and still desires her husband’s love.

Heather C. Jackson’s costumes are both beautiful and intelligently-chosen. Innocents Anne and Fredrika are always in pink and white, while the more mature Fredrik and Desire dazzle in red and black. The Leisbesleiders (Edwin Perez, Kristen Zwobot, Hillary LaBonte, George Wilkerson, and Holly Gibbs), who narrate the story almost in the fashion of a Greek drama’s Chorus, are in dapper tuxedos and muted grey and blue dresses, as they blend into the “little night” created by Lighting Designer Fuzz Roark.  Roark also designed the simple set consisting of Anne’s dressing table, red velvet covered seats and a blue and silver brocade bench, which is just right and does not distract from the complexity of the plot.  Keyboardist Michael Tan, percussionist Chris Marino and bass player Nick Fugate create beautifully toned music that made me want to join the actors onstage for a waltz.

From “Tonight” in West Side Story to “Last Midnight” in Into the Woods, Sondheim’s songs are made for strong, passionate voices. The Leisbesleiders’ voices often show strength, but when their voices are at full power, they are difficult to understand, especially during the opening number of “Night Waltz.” Emory and Guyton’s duet “You Must Meet My Wife” and Kavinski and Sullivan’s “Everyday a Little Death” are very entertaining. I wish the timeless solo “Send in the Clowns” was sung with more power as it was when Emory and Guyton reprise the song during “Finale” as a duet, which was full of strength and emotion.

An evening immersed in the beautiful work of Stephen Sondheim is always a treasure.  By joining the cast at Spotlighters, you too can lose yourself in A Little Night Music.

A Little Night Music runs through July 24th at the Audrey Herman Spotlighters Theatre at 817 St. Paul Street, Baltimore, MD.  For tickets, call (410) 752-1225, email tickets@spotlighters.org, or order online.  The running time of the show is 2 hours and 30 minutes plus a brief intermission.