In May of 1998, I stepped onstage, mustered up all of my courage, and auditioned for Montgomery College Summer Dinner Theatre for the first time.  For the next three summers, I spent practically every evening there as I rehearsed with my actor and dancer peers under the tutelage of Artistic Director Susan T. Hoffman and an incredibly talented group of directors, musical directors and choreographers.  Tonight, accompanied by my editor Joel Markowitz, I sat in front of the stage as I watched Summer Dinner Theatre’s first show of the season: Elton John & Tim Rice’s Aida. 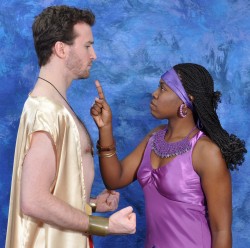 A line in the opening number, “Every Story is a Love Story,” perfectly sums up the plot of Aida: “This is a story of a love that flourished in a time of hate.” In Ancient Egypt, Captain Radames (played by Thomas Hunter Hedgpeth, Jr.) is both a warrior and an adventurer who becomes enamored with a Nubian woman – Aida (Nedra Ryan-Taylor Snipes) – who his men capture on one of their exploratory trips down the Nile River.  Although the two are drawn to one another, Radames is engaged to the Egyptian Princess Amneris (Katie Murray), and Aida is secretly a Nubian princess whose father is captured by the Egyptians in the country’s attempt to take over the Nubian lands. These circumstances force the couple to face the difficult decision of doing what is right for their countries, or starting a life together.

The title character of Aida is played by Howard University student Nedra Ryan-Taylor Snipes, whose soulful voice is especially poignant during the heart-wrenching reprise of “Elaborate Lives.”  Thomas Hunter Hedgpeth, Jr. plays Radames as both a cocky, powerful Captain and an emotional, introspective lover, who tries to exert his authority by forcing Aida to wash him after a battle but hauntingly admits that he “hasn’t felt clean in a while.” Hedgpeth exudes emotion throughout his entire body. This is especially visible during the wedding scene, when Radames’ pain can be seen in Hedgpeth’s shaking limbs and contorted facial expression, as he tries not to cry.  Hedgpeth’s vocal talent is apparent throughout the entire show, and his performance of “Radames’ Letter” is both lovely and endearing.

The stunning Katie Murray portrays Amneris, the “bright young princess with fabulous hair.” Murray is bubbly and vivacious during the first act, but as Amneris begins to realize her duties as a future ruler of Egypt, Murray is able to conjure up the princess’ inner struggle between love and loyalty.  Radames’ eerie and calculating father Zoser is played by William J. Dalton, whose voice captures the audience’s attention during “Another Pyramid” with its lovely tone  Nurney Mason II shines as Radames’ servant Mereb. Mason is a remarkably nimble dancer, and his magnificently rich voice rings out during “The Gods Love Nubia” and the reprise of “How I Know You.” Aida expresses my opinion of Mason when she says to the character Mereb, “You inspired me.”

In addition to directing, Pauline S. Grossman choreographs Aida’s spectacular and varied dances.  The choreography for “My Strongest Suit” is a mix of ballet and disco, and more traditional African dance steps are displayed during “Dance of the Robe.” While the ensemble dancers in “Another Pyramid” were not quite in sync for tonight’s performance, the intricate dance steps were superb.

Musical Director Marc Bryan Lilley not only leads a brilliant fifteen-piece orchestra, but his talent and experience are easily seen in the gorgeous music created by the actors.  The harmony created by Snipes, Hedgpeth, Mason and Murray during “Not Me” is absolute perfection.  Although the ensemble’s voices seemed overpowered by the orchestra during “Fortune Favors the Brave,” their beautifully strong voices wowed the audience during “The Gods Love Nubia.”

The set, lighting design, and costumes truly bring the audience into the world of Ancient Egypt. From the gorgeous blue and gold pillars topped with Egyptian artifacts that decorate the opening scene in the museum – to the towering pyramid walls that loom over the Egyptians – Scenic Designer Elizabeth Jenkins McFadden’s sets are impeccable.  Lynn Joslin’s lighting creates a rippling blue sea across the backdrop in one scene and then deftly changes to a golden African sunset. At the beginning of the second act, I gasped when hundreds of twinkling stars appeared against the backdrop. Tying it all together are Peter Zakutansky’s exquisite costumes. At the end of “My Strongest Suit,” Amneris re-enters the scene dressed to-the-nines in a red satin top that is connected to a shimmering red skirt by sparkling gold sequins. Another eye-popping costume is the robe that the Nubians give to Aida, which stretches across the entire stage.

Thirteen years have passed since the day that I auditioned at Montgomery College, and I am thrilled to say that the shows that my Summer Dinner Theatre family produces amaze me just as much now as they did when I was 18. As the cast took their final bow to a well-deserved standing ovation, I smiled and thought, “It’s good to be home.”