Ain’t Misbehavin’ at the Washington Savoyards: Smoking Hot Jazz, On The Rocks And With A Twist

Jazz fans rejoice and prepare yourself for an evening of hot vocals, flawless footwork and more laughs then you can handle! The Washington Savoyards presentation of Ain’t Misbehavin’, a Fats Waller Musical Revue, is sure to set your feet tapping. If you’re one of the lucky few, you can even join the performers on stage at one of four intimate tables, but be prepared to participate if ways you can’t even imagine. 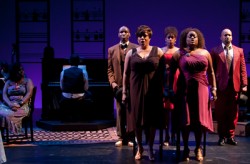 Based on the music of jazz ledged Fats Waller and arranged by Murray Horwitz and Richard Maltby Jr., the show features songs touching on everything from love and loss to sex, drugs and prohibition rock and roll –  jazz. Impeccably directed and choreographed by Michael J. Bobbitt, and musical directed and keyboardist  Darius Smith – you won’t be disappointed by the dynamite dance moves and spine tingling vocals. Even if Fats Waller’s music ain’t your cup of tea, this Ain’t Misbehavin’ is one hell of a show for those who like their tea hot!

The first note out of Nova Y. Payton’s (Nell) throat sent chills through the audience, and she continued to hit each and every song and step with the delightful fervor of a true entertainer. Songs to watch for include the side splitting duet “Find Out What They Like” and the emotional “Mean To Me.”

Savoyards newcomer Lauren Du Pree (Charlayne) easily stole the show with her precocious sense of humor, unstoppable dancing and ability to sing like a diva in “Handful Of Keys” or mask her unbelievable pipes with off-key comedic singing in “Yacht Club Swing.” This recent college graduate is a future star to keep on your radar.

Also debuting with the Washington Savoyards is the absolutely hysterical Clif Walker (Ken) who spent the evening cajoling countless laughs out of the audience and expertly contorting his face into the most comical expressions. Walker’s rendition of ‘Your Feets To Big” earned the loudest crowd reaction of the evening, while his duet “Honeysuckle Rose” was simultaneously heartfelt and hilarious.

Daryl A. Spiers (Andre), a third Savoyard’s first-timer, not only earned rousing applause for his rendition of “T Ain’t Nobody’s Business If I Do,” but sent quite a few audience members into a nervous fit of giggles during his open shirt performance of “The Viper’s Drag.” Spiers easily rules voice, body and the hearts of ladies on and off stage.

Iyona Blake (Armelia) rounds out the incredibly talented cast with her limitless vocal range and quirky sense of humor. She doesn’t take the stage; she commands it. Top performances of the evening include the sultry “Squeeze Me” and “Black And Blue,” a standing ovation worthy performance by the entire cast.

Ain’t Misbehavin’ plays through June 19th at The Washington Savoyards at the Atlas Performing Arts Center, 1333 H Street, NE, in Washington, DC 20002. For tickets call 202-399-7993, or purchase them online. The running time is about 120 minutes, with an intermission.