Figuring out Bob Rauschenberg can be a little like figuring out a neighbor’s backyard. The sprung sofa, the upside down bicycle, the dysfunctional broom, the tin of potted meat, the used tires, the stuffed goat, the empty boxes, the rooster: there’s a story there, but it’s definitely not linear. Then there are the snippets of conversation, lovers’ quarrels, pizza deliveries, cowboy songs, astrological ruminations, and bits of family history. It’s as frustrating as it is fascinating, and after ten years you’re no closer to knowing them than you were on the day you moved in. 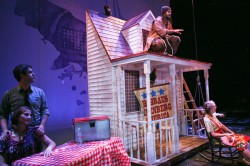 Well, I’m not any closer to understanding Rauschenberg than I was when I headed into the Forum’s manically energized production of bobrauschenbergamerica. But for a moment I felt I was in a room with him. For anyone who’s ready to drop their preconceptions at the door, it’s a rewarding 90 minutes.

As the title of this brilliantly conceived play by Charles Mee indicates, of bobrauschenbergamerica isn’t about the neighbor, or the painter, for that matter. It’s about the backyard. What may seem to be a theatrical patchwork of abrupt non-sequitors and cul-de-sacs is lovingly stitched together into a beautiful and occasionally scary landscape of the American brain. Don’t try to figure it out. Just sit back, relax, and, as one character reminds us, “see where it leads you.”

And, no, this isn’t another attempt to run the emotional gauntlet of a high-strung artist. For that, see Red,the bioplay of Mark Rothko that hit Broadway about a year ago. “bobrauschenbergamerica” is in some respects the ‘anti- Red. We see everything but the man himself, who, by the end, is more of a cipher than he was at the beginning. We do learn that he was born in a small town in Texas. And to actually drive that point home, Charles Mee (ably supported by scenic designer Natsu Power) begins by having his actors push out a two story gingerbread-sized house on wheels, complete with a front porch and second story window. Across from it, on the other end of the stage, is a construction that seems to verge between a junkheap and a sculpture of found material. We see a bathtub on wheels, a stuffed rooster, one-way signs, and a showerhead.

With the voiceover, presumably Rauschenberg’s, the one-way sign begins to make sense. “I start with anything…and then just let it come on.”

And that’s basically what Mee’s play does. He moves from one apparent non-sequitor to the next, and never looks back. True to the junkyard ethos, he grabs whatever is handy: a quote by the artist, memories of his colleagues and lovers, poems, Robert Kennedy’s speech on the evening of Martin Luther King’s death, and more: you’ll hear Walt Whitman, William F. Burroughs, John Cage, Merce Cunningham, and more. There’s another opening thought courtesy of Rauschenberg that is equally important: “The biggest thing is, don’t worry about it. You’re always going to be moving somewhere…” And that’s about as close as we get to the man himself.

Instead of Bob, we meet Bob’s Mom (Annie Houston), a prim, watermelon-and-cookie-bearing Texas matriarch, energized with an undertone of suppressed mania. As Becker Maboud Ebrahimzadeh offers a memorable derelict/poet/visionary. Susan (Julie Gardner) spars, breaks up, and reunites with her fiancé Wilson (Michael Dove). Bob, the Pizza Guy (Joe Brack) injects an American style serial killer into the mix. There are plenty of other surprises, which it would be a shame to give away. Okay, one more: we get a marching band!

Like any Rauschenberg work, this production teeters on the verge of perpetual disconnect. What keeps it together, in the end, is an ensemble that seems to have taken the painter’s (and the playwright’s) advice to heart. Don’t worry. You’re always moving. Rauschenberg has been criticized – by Rothko, among others – for being shallow and impenetrable. This unstilted, occasionally scary, occasionally sparkling production transforms that simple piece of advice into an act of faith. bobrauschenbergamerica is a world in constant flux, where nothing is exactly where we think it is  Sit back and enjoy the fireworks!