Writer and director Robert O’Hara’s Bootycandy is definitely not a play to take your kids to, but one you should definitely find a sitter for. Consisting of ten interconnecting short plays that deal largely with themes of sexuality and oddball family life, there’s a lot in just about every minute of this flashy and funny production that is certain to keep you entertained for one of the Woolly Mammoth Theatre’s best offerings this season. Not afraid to pack colorful punch after colorful punch, profane language of just about every kind in the book readily abounds in O’Hara’s original script as outrageous character after outrageous character makes an appearance and steals the show. 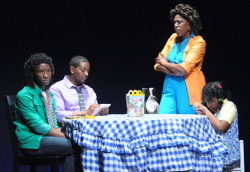 From its eye-catching and expertly fashioned sets and costumes, all the way down to a stylized program guide that seems to mock the genre itself (if there ever was such a genre to begin with), there simply isn’t one lacking aspect to be found in Bootycandy’s production values. And simply not enough can be said about how great Bootycandy’s ensemble cast is. Through various (and often instantaneous) costume and character changes, it quickly becomes easy to forget you’re watching a mere five actors and actresses on stage.

Actor Lance Coadie Williams (billed modestly as “Actor 4”) absolutely delights in one short as a revivalist reverend addressing his congregation about rumors of homosexual behavior among his church’s choirboys, and shows exceptional range by portraying a sentimentally brash granny nearing senility listening to old tapes of herself from her more spirited and clamorous days.

On top of its more raunchy and over-the-top character bits, Bootycandy manages to push the envelope of theatrical convention with a regular breaking of the fourth wall, and directly addresses the audience on more than one occasion in a very self-referential and clever way (in particular, the one short “Conference”). The play’s closing, which unfortunately does little to give an overarching narrative to the sum of its many parts, nonetheless provides a rare, touching and nostalgic take on family without getting anywhere near sentimentality.

Bootycandy amounts to an incredibly fun theater experience and comes highly recommended for groups of friends willing to down a beer or two. So, again this is not a play to takes your kids to see, but certainly one to go see and enjoy by any means necessary.

And if you’re wondering what exactly the word “bootycandy” means or refers to, don’t fret, you won’t be the only one not to know as you’re waiting for the show to begin. But you will know within minutes of the first short play. And once you know, you’re certain to be laughing along with everyone else.

This production contains nudity. Appropriate for ages 16 and up.