By Jeeves at the 1st Stage

1st Stage’s twentieth production – By Jeeves – is an Andrew Lloyd Webber musical about an Englishman, Bertram Wooster (Edward C. Nagel), and his valet, Jeeves (Matt Dewberry). Wooster is ready to play his banjo at a church benefit concert but the banjo is mysteriously missing, so from Jeeves’ advice he reenacts an eventful weekend instead. This musical is quintessentially English, farcical, and very entertaining. The plot includes disguise, mistaken identity, and absurd situations, so make sure you’re ready to laugh and to pay attention. 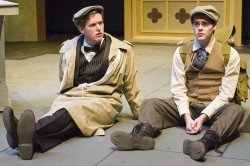 Jerry Kearns’ set design – a church with painted stone walls and stained glass, and a pulpit, sets the mood quickly. Stevie Zimmerman’s direction and the musicians are superb! During one song, the characters unveil a casket with a removable top that serves, hilariously, as a car for the reenactment. With a formidable accent, the protagonist Wooster drives the car casket with the wheel on the right side, showing the audience they are in the UK and taking them on a trip to the English countryside in singsong fashion. Providing the music are pianist Billie Whittaker, and bassist Jon Steele; and together, they compliment the quaint English setting – because they are not an overpowering orchestra but two musicians reenacting the story with their instruments. All the while, the play invites the audience to be part of the story through its dialogue and direction. Wooster frequently asks questions to and about the audience and several other characters, surprisingly, run through the audience to and from the stage. These effects are exciting and place the spectators into the world of the show, and does not restrict itself to the physical limits of the stage.

A great production must have great actors and here three fine actors steal the show: Edward C. Nagel (Wooster), JB Tadena (Cyrus Budge), and Matt Dewberry (Jeeves). Nagel is hilarious and perfects the English persona with an unflinching British accent and quirky mannerisms. Wooster is a nervous but funny man who seems to get himself and the people around him into trouble. He provides subtly funny comments about the unavoidable and uncomfortable situations he is placed in. Wooster turns to Jeeves, played by Matt Dewberry, after he’s been ‘unbanjoed’ for a new way to entertain his audience. Dewberry is a John Belushi look-alike and always has funny facial expressions. Jeeves uses his appearance to convey what he is thinking, giving him an air of seriousness and silliness, creating an interesting and absurd character at the same time.

JB Tandena portrays Cyrus Budge III, a competitive bully and bragger, and the only American in the musical. His character is a spoof on American stereotypes – with fists pumping every time he leaves or enters the stage.

A song in the musical that I and the audience loved was ‘The Hullo Song.” It’s a number about reintroducing yourself to people you’ve already met, and it was hilarious, acted by Wooster, Budge and Gussie (Wooster’s friend).

With several reunited couples, a happy servant, and identity switching that finally resolves itself, By Jeeves is a fun time at the theatre. It was sad to say “Bye Jeeves!” as I left the theatre.

Running time: Two and a half hours with intermission.