Adventure Theater’s production of Charlotte’s Web is a delight. An exuberant, talented cast and creative direction make this story of loyalty, loss and renewal engaging for children and adults alike. While the cast milks every possible laugh from the material, the fact is a pig loses his best friend. That is, his best friend who has saved his life dies. Some adults were given to sniffles and tears. The children present remained cheerful, however, thanks to Adventure Theater’s light touch and careful, child-friendly decisions on how to play and handle the material. 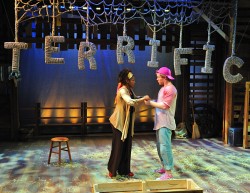 Davis Hasty is a highly animated, lovable, and rambunctious Wilbur. A lively chase scene after Wilbur escapes his pigpen (crying “It’s either freedom or the frying pan!”) had children in the audience shrieking with laughter. There is silliness fit for parents, too. When Wilbur and Fern (Blair Bowers) first lock eyes, the theme from Romeo and Juliet, “A Time for Us,” plays. This is, of course, just before Fern’s father appears with an ax, ready to dispatch the runt.

Charlotte (Deirdra LaWan Starnes) is compelling. With sinuous dancer’s movements, she weaves and ripples across the stage, a tender, wise, and charismatic spider. Danny Pushkin is a masterful sheep. Where an old fellow might grunt after delivering a sentence, or puff on a pipe as a kind of crotchety punctuation, the old sheep delivers a line and bleats. These elderly ovine sighs – perfectly timed – are the only animal sound any character makes and are all the more welcome and surprising for it.

The costumes are simple. That Wilbur is a pig is indicated by pink tennis shoes, a pink baseball cap, and a white shirt with pink sleeves. No curly tail even. For the most part the costumes, simple as they are, work well. The geese are clearly identifiable by their high yellow boots and their yellow-billed baseball caps. The rat was harder to guess at, as he was simply a guy in gray. At times, the simplicity of the costumes led to confusion. When Wilbur is at the fair, sleeping, a spotted creature comes to visit him. The boy behind me said, “A cow!” Her dad said, “Yes, a cow.” I duly informed my four-year-old that a cow was visiting Wilbur. It turned out to be a pig, Wilbur’s main competition. Corrections were made all around.

The set, designed by Luciana Stecconi, is well suited to the play, and since it is easily manipulated, there is no need for blackouts or any interruption in the action. A wooden panel is simply slid open or shut to indicate a new location. Straw is scattered or a trough moved into place. A clever addition to the fairgrounds set was the large projected shadow of a ferris wheel. Antique farm implements in the corners of the barn are a nice touch, though a bridle hanging on the wall may distract any horse people present, as it is put together wrong. The pace of the play is brisk and the action never stops. Director Serge Seiden has done a wonderful job packing so much comedy and action, movement and tenderness into a play that for some young audience members might otherwise be too heavy. The production is first rate. Expect to be transfixed, whatever your age.

Charlotte’s Web plays through September 5th at Adventure Theater, 7300 MacArthur Blvd, in Glen Echo, MD. Purchase tickets online, or call the box office (301) 634-2270. The running time is about 55 minutes, with no intermission.