I think there should be a mandatory law to see children’s theater. I came into Children of Eden expecting a cute laughable show with children pretending to sing and dance; I came out stunned and speechless. Children of Eden, directed by Danny Tippett (I am tipping my hat to you, Sir!), is a musical written by composer Stephen Schwartz about the book of Genesis, specifically the stories of Adam and Eve, Cain and Abel, and Noah’s Ark. This is not a religious show – do not expect to be preached to . It is three stories about family, choice, innocence, and knowledge. The performances slap you in the face, exclaiming, “These kids are better than your professionals!”Every song is a hit, one after the other, showing off young voices that make every hair on your body stand straight from shock, and then shaming you for thinking that children’s theater is not as talented or serious as professional. The costumes, the set, the choreography, the lighting, are all perfection, just like paradise. There is so much for us to learn from this production, and it is all the more wonderful that it is children who do the teaching. 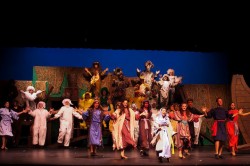 The cast of Children of Eden. Photo by Erica Land.

Colorful, energetic, and imaginative are the best words to describe the set design, created by Bill Pressly, and the costumes, made by Charelle’s costume shop. The set looks like a wooden jungle gym that is made for climbing and hiding that changes drastically to fit each story. Noah’s Ark fit two of (almost) every animal in every nook and space in the jungle gym, while Eden had a waterfall going through it and a tree-house that represented the tree of conscience. The costumes for the animals included, frogs, unicorns, giraffes, elephants, tigers, birds, whales, and more that were colorful, feathery, and adorable. Watching these creatures run through the audience singing and dancing onto the stage is magical. The choreography created by Kurt Boehm incorporates modern dance and ballet that is beautifully orchestrated by the young performers. Songs that include the entire company are breathtaking because there are so many animals and people of all colors and sizes singing and dancing all at once!

It is impossible to justly describe all of the impeccable performances in this musical. All of the songs are wonderful, but there are performances that blow every show on Broadway out of Eden. Eve, played by sixteen-year-old Leora Goldbloom-Helzner, has vocals that must have come from heaven! She sang “The Spark Of Creation,” which is about Eve’s curiosity and choice to find answers about the world. “In Pursuit of Excellence” is sung by the snake, characterized by six young actors, who carry and wiggle the snake as they personify it by accentuating the ‘S’ sound while they sing and dance. Other wonderful vocal performances come from Jonny Perl, whose booming tenor rings out as Adam and Noah, especially during the beautiful and moving “The Hardest Part of Love”. Ivanna Barrie, as Mama Noah, shakes the roof with the gospel-esque “Ain’t it Good?” A special kudo to Jake Land, who plays a sweet Abel. These kids are overachievers!

“Generations” displays the talented dancing and stunning choreography, which is present during the entirety of the production, but accentuated in this scene with the multitude of performers onstage all mixing and becoming one dance extravaganza. The second half of the show is flooded with greatness, particularly through Yonah, played by Milagros Diaz, and Japheth, played by Sean Watkinson. Diaz wears a beautiful red robe while singing “Stranger to the Rain”, a heartbreaking ballad that only a true star could belt. During their duet, Yonah and Japheth have a palpable romantic connection that seethes into the audience. You cannot help but cheer for the couple in their pursuit for Noah’s blessing.

Children of Eden is a must-see! It is a heartwarming production fueled by young greatness that is incomparable to any show on stage right now. These performers will illuminate your mind, warm your heart, and fill you with actual visions of the Garden of Eden.

Children of Eden plays at Rockville Civic Center’s F. Scott Fitzgerald Theater, 603 Edmonston Drive, in Rockville, MD. There is one remaining performance on Sunday, June 26th at 2 p.m. Purchase tickets at the door.