Doubt: A Parable at the Audrey Herman Spotlighters Theatre

“What do you do when you’re not sure?” This first line of John Patrick Shanley’s Tony and Pulitzer Prize-winningDoubt: A Parable speaks volumes for both the plot of the show and how the audience feels as they watch the events unfold. Directed by Randy Dalmas, Audrey Herman Spotlighters Theatre’s cast presents an incredibly compelling and thought-provoking show that is perfectly summed up in the words of Set and Lighting Designer Fuzz Roark: “It may ask more questions than it answers.” 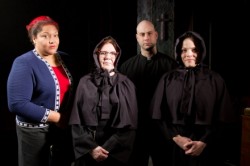 At Spotlighters, the theatre IS the stage and is made up so that the audience almost becomes part of the cast. Set and Lighting Designer Fuzz Roark creates a remarkable ambiance for this theatre-in-the-round which makes the audience believe as if they are about to partake in a Catholic mass.  One corner of the room is made up like a pulpit, complete with stained-glass window design and illuminated by purple lights. Another corner represents the Catholic school’s garden, with ivy climbing the walls and a statue of the Virgin Mary and Jesus prominently displayed. The actual stage is made up as the principal’s office. A dark wooden desk chair covered with papers and a rotary phone sits in the middle of the stage, but enough room is left for the actors to be seen by all sides of the audience. Most forecasting, though, are the crosses on the pillars in each of the four corners of the stage.  These symbols of Catholicism are reflected in the mirrors nearing the ceiling, almost as if a higher power is watching over the proceedings.

At the Saint Nicholas School in the 1960’s, Sister Aloysius Beauvier (Sherrionne Brown) runs a tight ship. She believes in traditional hard work and not in frivolous extras, like music, art, or dance. She enjoys being feared by her students and encourages one of the school’s teachers, Sister James (Karina Ferry) to act in a similar fashion. Underneath that tough exterior, however, Sister Aloysius truly cares for her students and is concerned about their relationships with Father Flynn (Michael Leicht). When Sister James reports that a student returned to her class looking out of sorts and with alcohol on his breath after visiting with Father Flynn, Sister Aloysius knows that it is time to take action and is determined to stop Father Flynn before he harms another child.

Sherrionne Brown’s portrayal of Sister Aloysius is absolute perfection. She never wavers in her role as the no-nonsense principal, and one can see her emotions in every inch of her body, even down to her clenched fists during arguments.  Brown’s performance is especially poignant during her final showdown with Father Flynn, when her solid composure turns to fiery rage as she insists that her beliefs are accurate and that he is trying to deceive her.

The outstanding Michael Leicht’s Father Flynn is charming but keeps the audience suspicious.   Until the accusations of his character’s inappropriate relationships are raised, Leicht wears a smirk on his face, leading the audience to believe that he may in fact be hiding something sinister.  Even the way that Leicht sits too closely and carefully caresses the back of Sister James is uncomfortable to watch, although no absolute proof of his indiscretions has been revealed.

Karina Ferry and Nicole Mullins beautifully round out the small cast as Sister James and Mrs. Muller, respectively. Ferry expertly depicts the young nun who Sister Aloysius refers to as “excessively innocent” by always appearing wide-eyed and eager to please. Even after a brief angry outburst, Kerry’s Sister James quickly repents and looks once again to her principal for guidance. Mullins shows great strength in her role as the allegedly-abused boy’s mother, as she roars at Sister Aloysius and insists that her child be able to finish the school year without any disruption.

Heather C. Jackson’s mostly dark costumes both set the tone for the seriousness of the play’s plot and are also historically accurate. Father Flynn dresses traditionally in black, and Sisters Aloysius and James both wear long dark dresses and caps cover their heads. The more youthful Sister James’ skirt ends in ruffles, which is more fitting to her personality.

From start to finish, Doubt: A Parable is absolutely amazing. This is a show that should definitely not be missed!