An adaptation of Alan Lightman’s novel of the same name, Einstein’s Dreams attempts to bring to the stage an amalgamation of the young scientist’s life and work during the time he spent putting the finishing touches on a series of now-renowned academic papers, that outline his theory of general relativity. Part stylized docudrama and part expositional exploration of the philosophy underpinning – Einstein’s most significant contribution to theoretical physics – director and choreographer Rebecca Holderness’s production does as much as it can to draw its audiences into the deceptively emotional and turbulent time Einstein spent working on his masterwork. 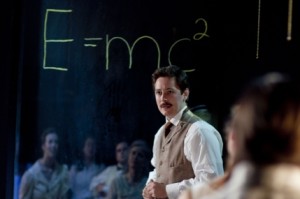 The play’s conceit is an interesting one, whereby explanations of Einstein’s theory are given equal stage time with characters from his personal life. And to make matters even more interesting, the play from its beginning purports to be a series of the scientist’s dreams. Its large ensemble cast dons turn of the 20th century period costumes, and the stage has been done up in such a way to facilitate as much of a dreamscape as possible – a dozen or so bare incandescent light bulbs dangle from the ceiling, a large one-way mirror reflects back on the audience – and generally manages to imbue the action on with a sense of abstraction and other-worldliness.

The play is organized as a mélange of vignettes with characters from Einstein’s future (vocal in their possession of knowledge concerning his destined greatness) interact with events as they unfold on stage, breaking from addressing the audience directly and slipping into scenes to speak on behalf of other characters in the play’s present. But as one would expect of any production that attempts to tackle head-on a play of ideas, Einstein’s Dreams suffers from an occasional lapse into overwrought and overly serious expositional soliloquies. A syrupy soundtrack plays throughout to sometimes shoehorn emotional resonance into a scene, and inadvertently works against the play’s climax when Einstein presents his papers on relatively in public for the first time, and the scene abruptly and suddenly ends.

Holderness deserves praise for her expert managing of the production’s choreography. At all times in the play, much is happening on-stage, off-stage, stage-right, stage-left, with every ensemble member involved in elaborate modern dance-esque maneuvers, and not once does the constantly evolving visual feast distract from the play’s narrative momentum.

Einstein’s Dreams is ultimately at its best when Einstein’s life story takes center stage. The play’s most lively and engaging moments come when the young Einstein (faithfully and cheerfully portrayed by the talented Adam Segaller) interacts with his boisterous and larger-than-life friend Besso (Jonathan Fitts) and they discuss everything under the sun other than physics. Actual scientists in the audience make take issue with the play’s superficial treatment of the mathematical and scientific concepts bandied about in the play’s dialogue like props, but for everyone else, there isn’t much in Einstein’s Dreams that’ll leave you scratching your head.