The Making of a Modern Folk Hero at Source Festival

If you took three parts irreverent comedy, one part comic book drama and a pinch of suspended disbelief, you’d get The Making of a Modern Folk Hero, written by Martín Zimmerman and directed by Catherine Tripp. Premiering in the DC Source Festival, Folk Hero has done more then make it’s mark; it’s changed the entire game. 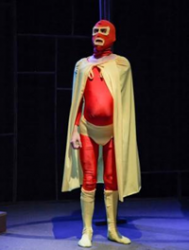 When a public housing property is threatened, a congressmen hatches a crazy scheme involving his out of work thespian friend and a yellow spandex suit. More then a play, Folk Hero is a memorable ride through detailed audio and visual additions.

By flawlessly incorporating the every day status updates of life via a changing projection, Renzo (Bradley Smith) is able to keep his followers and the audience ‘in the know’. Smith steps into the role of cynical and out of work actor so intensely the audience nearly forgets they are watching a player of the stage playing a suicidal player of the screen. High marks for pulling off bright spandex without a care in the world.

David (Odell Ruffin), the master mind behind Renzo’s superhero second personality, treads the thin line of friend and politician in an attempt to save public housing, without loosing public face. Ruffin performs solidly, but it is hard to tell if the slowed pacing is  because of the script or if it is a stylistic choice. Unfortunately the on stage chemistry isn’t  as natural as it could have been.

Vanessa (Danielle Davis) a cheeky investigative blogger, gives a neutral perceptive of Renzo; as a masked superhero standing up for the little man. Knowing nothing of his exploits, Davis slips back and forth between showering the hero with comical scorn and heartwarming praise. The intelligent curiosity Davis exudes is a prime example of understanding your character on all levels.

The one person ensemble of Woman (Katy Carkuff) was easily the most understated role of the piece, but this woman sure gets around. From reading stage direction to filling in as an entire mob, Carkuff flexes her acting muscles to seamlessly fill each role with poise and humor. Throughout the evening she tows the audience along from scene to scene in and otherwise sparse set.

Without the technical genius of lighting designer Chris Holland and sound designer Eric Lott, the heart-stopping ending would have never been possible. Check it out if you’re looking for a comedy that’s not afraid to ask the tough questions, or the absurd ones.

The Making of a Modern Folk Hero and Source Festival runs through July 3rd at Source, 1835 14th Street, NW, in Washington, DC. For more information and the list of plays, click here.