In 2007, while Broadway stagehands held out for more money, I took a group of members from The Ushers (a social group of theatregoers I have been running since 1990 in the DC area), toFrankenstein – A New Musical with music by Mark Baron, lyrics by Jeffrey Jackson, and a book by Jackson and Gary P. Cohen, which starred Christiana Noll as Elizabeth, Hunter Foster as Victor and Steve Blanchard as the creature. The creators took pride in saying their adaptation was “uniquely faithful” to the Mary Shelley novel.  Here instead of loving the creature he has created, the mad scientist Frankenstein rejects his not-so-good-looking ‘son’ and the kid’s pissed – especially when Dad sets the laboratory on fire trying to fry him and then Dad kills the girlfriend he’s supposed to create for him. Wouldn’t you be livid? Frankie, Jr. sets out to annihilate the family and chases Daddy around the world until he finally corners him at The Arctic Ocean. 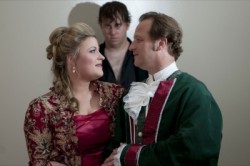 I know it sounds a lot like Les Miserables with Frankenstein acting like Jean Valjean and Jr. acting like the frustrated and angry Javert. And Mr. Baron’s score is an outright theft of the highest degree – literally lifting musical themes and songs from The Secret Garden, Oliver, and of courseLes Miserables and making them his own. In fact, The Creature’s song “These Hands” is curiously similar to Javert’s suicide song. You have to give Mr. Baron credit – he steals from the best. Jeffrey Jackson’s lyrics – are to say the least – forgettable.

Now Take Flight Theatre Company has courageously taken up the challenge of bringing this problematic musical to the intimate Waddell Theater at Northern Community College in Sterling, VA, and succeeds in capturing the darkness of the piece with fine performances by its cast and a fabulous orchestra lead by Musical Director David Rohde.

Brent Stone and Michael Reid bring an abundance of passion to their performances of Victor Frankenstein and The Creature. Molly Hicks Larson as Victor’s ever-suffering and later ‘neck snapping’ girlfriend and later spouse – sings beautifully and her rendition of the show’s one gorgeous song “The Hands of Time” is quite lovely. Thankfully she gets a chance to reprise it with Mr. Stone in the Second Act. Ryan Khatcheressian lends his beautiful tenor to the role of Victor and Elizabeth’s friend Henry. Suzanne Todd is tough and funny in the role of Justine Moritz, an adopted member of the Frankenstein clan.

Natalie V. Safley has directed her cast to sing everything LOUD – no – LOUDEST! At times the screaming becomes unbearable and the father/son relationship is drowned in the high decibels. You don’t even see the ending coming and when it does – it’s laughable. But despite these loud short-comings, there are quieter moments that are worth the price of admission, supplied by 3-time WATCH Award winner Andy Izquierdo and Stephanie Pencek playing The Blind Man and Agatha, singing a gorgeous “The Music of Love”, and by Bob Chavez, Victor’s father Alphonse, who sings “Your Father’s Eyes” (similar to “Lily’s Eyes” from The Secret Garden) with a twinkle in his eye and pain in his heart.

Rick Wilson’ shipshape set provides the dark ambience needed for this musical. Josiah Allen’s clever projections – which were shown on three sails over the set – provide the ever-changing locations and special effects of the story – including the family headstones, crashing and crackling lightning and thunder in and outside of Frankenstein’s laboratory, and the frigid Arctic Ocean. At the opening night performance, there were major sound problems – too many to list here, including Mr. Stone’s mic which went out shortly after the performance began, and unfortunately his singing at times was inaudible until the Second Act when the problem was resolved. I felt sorry for Mr. Stone. Hopefully Sound Designer and Board Operator Terk Polat, Sound Design for the microphones Turner Bridgeforth and sound assistants Kelsey Londregan and Caitlin Simmons will work together to resolve these annoying sound mishaps. Mary Ayala-Bush and her assistants Allegra Joffe and Rafie Khoshbin did a fabulous job with the colorful and eye-popping period costumes, especially Elizabeth’s stunning dresses and wedding gown, which was lit beautifully by Lighting Designer Ian Claar, Lighting Programmer Earl Boatman and Light Board Operator Alex Lee. Melodie Wilson did a fine job with Hair Design as did Kat Brais and Andy Izquierdo with their Makeup and Mask Design.

Running Time: 1 hour and 45 minutes plus a 15-minute intermission.