I Wish You Love at The Kennedy Center

After premiering at Penumbra Theatre in Saint Paul, Minnesota, I Wish You Love about the late singer Nat King Cole is making a short stop in the Kennedy Center’s Terrace Theater, with the assistance of the Kennedy Center Fund for New American Plays. Directed by Penumbra Theatre’s founder and Artistic Director Lou Bellamy, the show takes place in the studio where Nat King Cole’s weekly variety show was aired on NBC for a short time during 1956–1957.  Cole was the first black entertainer to host a variety show which was beamed into households all over the country. After a short run, the “nervous” advertisers  pulled the plug. 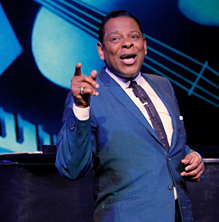 In a running sad commentary on the times, Cole, played by the affable Dennis W. Spears, smiles right “on cue” for the cameras. Although this shtick wears thin pretty quickly – the audience the night I attended roared every time Spears grinned that fake smile. Spears also sings over 20 of Cole’s biggest hits, including “Mona Lisa,” “Get Your Kicks on Route 66,” “Send For Me” and “Stardust.” Spears has the inflection and stretching of the vowels that was the Nat King Cole style of singing — down to the last “MOHNAH LEEESAH.”  Of course no one can duplicate that once-in-a-lifetime velvety Nat King Cole voice and charm, and although Mr. Spears was having a difficult time singing the low notes that night during the First Act, in the Second Act he nailed it. I could have sworn the real Nat King Cole was singing on that Terrace Theatre Stage.

It didn’t surprise me that Mr. Spears was having a tough time singing to a tinny recorded track that sounds like it was synthesized. Who wouldn’t? And what a disappointment to see that Mr. Spears cannot play the piano (Cole was a fantastic ivory-tickler). Sadly, the big piano that fills up a large space on the set is left untouched for most of the show.

Co-stars Kevin D. West — who plays Cole’s bass player Oliver Moore — and Eric Berryman — who plays Coles’ young guitarist Jeffrey Prince — cannot play their instruments, and are not rehearsed well enough to even attempt to “fake it.” The recorded track has a drummer playing on it, but no drummer appears on stage.

On a positive note, C. Lance Brockman’s TV studio set, which includes what looks to be two large radios on both far sides of the stage — makes Kennedy Center patrons feel like they are audience members at several of Nat King Cole’s variety show episodes. The flashing “Applause” signs keeps the audience involved in the action. Studio lights and cameras surround the set and Mr. Spears performs on five monitors, which also show newsreel coverage of bloody street battles that occurred during the many civil rights marches. But also projected on the screen are positive events that changed the course of the country including Rosa Parks refusing to move to the back of the bus, Althea Gibson winning Wimbledon, and the integration of nine black children in Little Rock Central High School, in Arkansas. We also hear political commentary blaming President Dwight Eisenhower for his inaction on signing The Civil Rights Bill that sat unsigned on his  Oval Office desk. Michael Tezla, (who also plays playing Cole’s manager, Bill Henry) plays the NBC newscaster and gets to narrate what’s happening in the news.  Henry’s voice brings back good memories of my childhood hearing Walter Cronkite sign off every night with “And that’s the way it is.”

Writer Dominic Taylor book is too wikipedia-ish and at times very preachy and repetitive, and I was not thrilled how he wrung tears out of his audience by having the young promising guitarist (who Cole has “adopted” after Jeffrey’s father – who was Cole’s longtime drummer – died) get attacked after a concert and have his hearing in one ear destroyed. But it worked! You can only imagine the “Oh No’s” and “Oh My God’s” coming from weepy audience members when injured Jeffery returns from the road with his destroyed ear all bandaged up. (And all this after Nat promised Jeffrey’s mother that he would take care of the kid! Guardians like Nat we don’t need!)

When Spears sings “Smile” at the end of the First Act and “Walking My Baby Back Home” after Jeffrey’s beating, the usually upbeat songs become a sad commentary of Jeffrey’s attack and the other beatings and killing that were occurring on a daily basis while Civil rights protesters were marching for equality. These two powerful and uncontrived and sincere moments of the night were very moving.

With better writing and some excellent live musicians I Wish You Love could become “unforgettable.”

I Wish You Love plays through June 19th in the Kennedy Center’s Terrace Theater, in Washington, DC. Purchases tickets online or call the box office (202) Running time is 2 hours and 30 minutes, including one intermission.