Jack and the Bean-Stalk at 1st Stage

1st Stage in partnership with First Draft revamps the classic tale of Jack and the Bean-Stalk onstage in a hilarious and imaginative production, wonderfully directed by Leslie A. Kobylinski. This version of Jack and the Bean-Stalk is particularly fantastic in that it thrives where similar plays of its nature falter: keeping adults interested and entertained during a child-specific production. 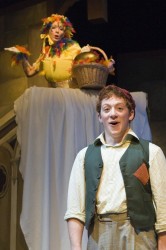 Soft green lighting illuminates Jerry Kearns’ beautiful set of painted stone walls and stained-glass windows, along with carefully-placed drapes that later prove to conceal thrilling surprises. Upbeat, jazzy music has some kids dancing in the aisles before the production, while others are immersed in their very own interactive program, specifically designed for children, as their parents thumb through the “grownup” version. The happy, excited atmosphere itself is enjoyable, and in what seems like no time at all, the lights dim and the theater is filled with shushing as the show begins.

One by one, characters burst out from under or behind seemingly innocent drapes, to the surprise and delight of the audience. The costumes, created by Cheryl Patton Wu, are delightfully bright and vibrant, varying from feathered caps and vivid patches to flowy, colorful scarves, each one more impressive than the last. The lighting, done by Andrew Jorgenson, does a great job capturing the mood through color and precise spotlights. Each character introduces themselves through an enjoyable song, and they keep up steady interaction with the audience throughout the story, either by talking to specific audience members or by asking general questions. Through this, the audience earns an active role in the story itself, and is not merely observing it.

Mario Baldessari is outstanding as the cranky Bertram Pricklebumm, instantly acknowledging the audience by asking what they are doing in his house. Resigning to the fact that these people expect a story, Pricklebumm begins to narrate, using terrific voices and expressions throughout. He engages the children by asking them questions and does not ignore the adults, either. Once pausing, offended, he yells: “quit texting back there, I’m attempting to entertain your offspring!” Gannon O’Brien also does a wonderful job as The Meandering Minstrel, who strolls around the stage strumming his guitar, helping to move the story along. Ethan Slater is adorably naive as Jack Spriggens, and Liz Dutton is amusing as his piteous mother, Mrs. Spriggens. Joshua Dick proves very entertaining as Milky-White the Cow, energetically winning laughs with statements that reflect the thoughts of the audience, such as “this doesn’t look like a Bean-Stalk, it looks like a ladder with leaves on it” (which indeed, it was), and quibbles with the narrator for more stage time. Tyler Herman winningly portrays the villains in the story, both as the distrustful stranger Sir Alastair T. Shropshireforth the III and The Giant As The Giant, Herman skillfully hides behind an outrageous Styrofoam mask, with matching hands as big as trash-can lids. Leigh Anna Fry also captures the audience’s attention as the beautiful and flirtatious Hen What Lays the Golden Eggs.

The ensemble does an expert job at keeping rapt attention of the audience, both young and old, giving outstanding performances with lots of energy and playful humor. Each character has a specific and silly “moral” to share with the children at the play’s end, as an excellent way to wrap up the story. After taking a bow, the cast members do not hesitate for a moment, coming into the audience to talk and laugh with the children and their parents, signing autographs and posing for photos.

This show is well worth an hour of your time and will no doubt leave you in good spirits. The children in the audience all seemed to have a wonderful time. While it is a show tailored to children, adults will surely enjoy it just as much, if not more. I myself had no obligation to entertain a child; and as a reviewer I experienced it through the viewpoint of a solitary adult…and I loved every second of it.