Some people tend to play the same scenes over and over in their lives. Pulitzer Prize-winning (for Art) playwright Yasmina Reza’s Life x 3  which is currently playing at the Elden Street Players in Herdon, VA, utilizes this concept by having the same scene repeated three times with slight variations. The story takes place in the evening at the home of husband and wife, Henry and Sonia, who just put their bratty son – named Andrew – to bed. Henry, a research scientist is anticipating tomorrow night’s dinner party with his superior, Hubert and his wife Inez -when out of the blue they arrive a day early. 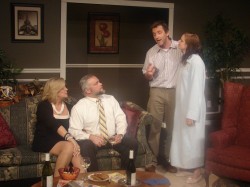 Andra Dindzans (Sonia) and Kevin Walker (Henry) make a terrific contrasting pair – Sonia as the “tough love” wife and mother and financial lawyer, and Henry – the mild mannered husband, research scientist, and nurturing father. Walker ably portrays a nerdy research scientist – who hasn’t published in three years – without turning it into a caricature. His not-too-messy appearance and glasses gives the audience the impression that he is a nerd. As part of his character he mumbles much of his words as if he has a speech impediment.  Unfortunately, the speech impediment was so realistic that too many words were “swallowed” in his dialog. No need to worry! If you missed anything during the mumbling, you get a total of three chances to hear nearly the same story in 90 minutes.

At first, Andra’s Sonia is one dimensional. In the first scene she is constantly angry and annoyed with the baby’s crying – and with her husband for giving into the baby’s demands for food and attention. But then in her later scenes, we begin to see other parts to her character coming out. While the baby is never seen on stage, the spoiled and wining baby, named Andrew, is heard crying “I’m not tired!” and “I want to join the party too!” Chanukah Jane Lilburne as Andrew is convincing as the six year-old brat that won’t keep quiet!

Kathy Dunlap’s costume design is subtle but very effective. For example, Inez wears lots of jewelry, including big rings and an expensive necklace and bracelets, compared to Sonia who is only wearing a modest wedding ring. Little things like characters wearing a suit jacket or not – or glasses being put on or taken off suddenly – help to explain the scene without using words.

Many of the laughs can be credited to Susan d. Garvey in her role as the outspoken Inez, who isn’t afraid to tell it like it is! From her standing on a couch – to her walking around in complete drunkenness – Director Meg Miller moves Garvey around the stage well, and it lends to a nice comedic effect.  Ian Brown is terrific as the arrogant astrophysicist Hubert. His loud, gruff voice overpowers everyone in his presence, and believes that Henry and Sonia should be licking his boots!

Running time is 90 minutes with no intermission.

There is some language that may be inappropriate for audiences under 13.