One Flew Over the Cuckoo’s Nest at Silver Spring Stage

On only the rarest occasions does a company pull off the complexities of Ken Kesey’s stage adaptation of One Flew Over the Cuckoo’s Nest by Dale Wasserman, but Silver Spring Stage more then delivers. The well-rounded production touches both the heart with its intensely emotional characters, and the mind with enthralling sensory stimulation.

Cuckoo’s Nest follows the chaotic journey of Randle P. McMurphy (an inspired performance from William Cassidy) as he navigates the dangerous political waters of on Oregon Sate mental hospital. Under the predatory watch of Nurse Ratched (a calm, yet satisfyingly creepy Natalie McManus) McMurphy battles with unsavory hospital rules and encourages fellow patients to
stand up for themselves. With the two main characters immediately butting heads, it is an edge-of-our seat experience to watch the building agitation come to a boiling point. 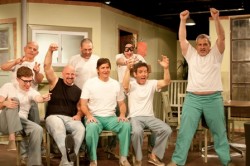 The cast of One Flew Over the Cuckoo’s Nest. Photo by Harvey Levine.

jobs and Aide Warren (perfectly overbearing and obnoxious Michael Sachs) and Aide Williams (the audience’s love to hate character – Weis Valen) complete Ratched’s hospital crew. From rambunctious patients to the unexpected midnight party, Williams and Warren take their lumps with resolve and hilarious facial expressions. Aide Turkel (played by Terry Spann) by far receives the most laughs of the evening for his role’s commentary on the 1960’s Black stereotypes.

Though the performance runs for over two hours, director Bob Benn paces the show perfectly. Although bits and pieces tend to drag a little in the first act, by the time intermission rolled around, the audience is so enraptured it took a moment to realize the house lights had come on. Unfortunately for the opening night audience, a fuse blows with 20 minutes to go, but the cast admirably keeps moving forward and the lack of lights lend a sense of tension to the end.

Lighting designer Bob Scott and sound designer Michael House wrap the beautifully crafted show into a fine package with out-of-this-world lighting, and a ‘trippy’ but fitting soundtrack to the play’s insane premise. Set designer Bob Benn completes the spectacle with a straight-to-the-point set that captures both the sterile hospital atmosphere and the silent prison perception.

One Flew Over The Cuckoo’s Nest plays through July 24th at Silver Spring Stage, 10145 Colesville Road, in Silver Spring, MD. Make your reservation by calling (301) 593-6036 or purchase them online.