Playwright Michael Hollinger trained as a classical musician before concentrating on Theatre in graduate school where, he writes, he “made the mistress an honest woman.” Opus, which received Philadelphia’s Barrymore Award in 2006 for Outstanding New Play, is Hollinger’s love letter to his former frustrating flame. 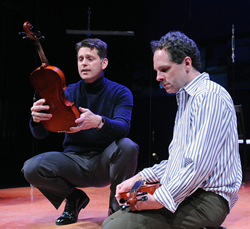 Director Jim Petosa’s powerful production opens in a rehearsal of exaggerated, deep breathing. It’s a rare scene of tense peace. The members of the Lazara String Quartet – have fired their most talented, if emotionally unstable and unreliable member – the viola player Dorian, who disappeared after “going buggy” and have replaced him with Grace, a talented young musician – six days before a White House performance in which they decide to tackle Beethoven’s demanding Opus 131. As the four work furiously to “gel,” Dorian reappears and havoc – including a “smashing” scene – ensues. We realize very early in the play that these talented musicians are not always playing the same tune or on the same musical page.

The characters finish each other’s sentences and, as a spotlight courtesy of Daniel MacLean Wagner flickers among them, they are occasionally being interviewed for a documentary. In appropriately spare rehearsal rooms designed by Cristina Todesco, they struggle in turn to define ‘quartet’ (Alan: “It’s like a marriage with more fidelity”) in between their quarrels and playing. Sound Designer GW Rodriguez’s music floats over the quartet, who move in mime as if playing the music.

The relationship between Dorian (Benjamin Evett), the fired member, and first violin Elliott (Michael Kaye) is, to put it lightly, volatile. Evett is wonderful as Dorian, the tortured divo who, in a nice detail executed by costume designer Kathleen Geldard, perpetually wears flip-flops and black toenail polish. Kaye – who plays a snide Briton – is hard to take your eyes off. Elliott’s terse explanation for Dorian’s aggressive passion is that “Dorian felt things more deeply than most people.” (Note the past tense; it’s as if Dorian is “dead to him.”) Kaye and Elliott deftly go back in time to recreate Elliott and Dorian’s early relationship as lovers. A scene in which Dorian and Elliott sit next to each other, straddling black rehearsal chairs, describing the first time they played together is particularly poignant. Alan (Shelley Bolman), the second violinist, hits a home run as the avid sports fan and who is suddenly falling for the new. Becky Webber plays Grace with must charm. Carl (Paul Morella), who plays the cello, is a cancer survivor and although he is the quietest and the most down-to-earth member of the quartet, he also displays power in some of Carl’s emotional scenes

What makes Opus so rewarding is the rare opportunity to watch the musical process unfold in front of you. Watching a member of the quartet caressing a vintage violin, or the members discussing how a certain piece should be played and having one of them say, “If Beethoven wanted a crescendo in bar eight, he would have put it there!” brought me new insight into the soul of these fine musicians.

Hollinger has said that Opus is “about work, what we leave behind us when we’re done.” His Opus is remarkable because it isn’t one art form imitating another; its focus is small and therefore colossally brave. I know I’ll never listen to a chamber quartet quite the same way again.

Running time is 1 hour and 30 minutes without an intermission.