On his personal website, Playwright/performer Charles Busch describes Psycho Beach Party as “Gidget, Frankie and Annette beach party epics and Hitchcock psychological suspense thrillers such as Spellbound and Marnie are given a shotgun marriages.” It’s about Chicklet, a teenage girl who suffers from multiple personality disorder. And although the play is a satire, as Mr. Busch says above – he uses mental illness as its primary ammunition and hilarious cultural references scattered throughout the play for back up. The jokes and dialogue range from crude, intellectual, satirical, to superbly over-dramatic, so be prepared to laugh uncontrollably and, possibly, against your will. 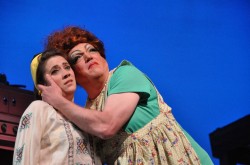 The setting is during the 60’s in Malibu and the décor and costumes could not be more appropriate. There are surfboards, bleach blondes, a trailer that flips and shows the inside of a typical homemaker kitchen, and even a beach dock. Scenes of surfing are portrayed through characters sitting on waves on wheels, fixing their hair or drinking their morning coffee, while being pushed across the stage. Most of the actors are half-naked (in bathing suits) during the entire show, making the crowd feel like getting ready for the beach as soon as the show starts. The time frame is effortlessly understood in the dialogue and acting, the “lingo” is perfected and the movements relay hippie and beach bum attitudes.

My embarrassing and unrestrained laughter could not be evoked without fantastic acting. The protagonist Chicklet is a sweet and innocent teenager who just wants to fit in and learn how to surf, but her alter personality Anne, among many others, is a sexy manipulative dominatrix who wants to rule the world and exterminate anyone in her way. The lighting changes colors when Chicklet switches from one to the other, conveniently for the audience to follow. Chicklet is unaware of her disorder and does not remember the actions of her alter egos. As one character wittily observes, she is “two Chicklets in one.” To portray such a character is a difficult task but it is thoroughly accomplished by actress Ashley Elizabeth Bacon who is cherubic at one moment and satanic the next – and impossibly believable at both extremes. The audience has no doubt that Chicklet is one messed-up girl.

A character that cares deeply for Chicklet and shines in her own special light is Berdine, her best friend, played by Rachel Ptak. Berdine is a highly intellectual yet comically awkward young girl, spewing Dostoevsky and Sartre references while being childishly nervous and hopelessly devoted to Chicklet. The energy between Ashley and Rachel is contagious and makes you want to jump up and down with them, especially during one scene of a post-fight make-up in which they renew their love for each other with such passion that exists only in the realm of true friendship.

There are great performances from the very funny Chris Gillespie, who plays Mrs. Forrest, and Laura Fontaine, who plays the venomous Marvel Ann – the classic beach blonde b***h. Mrs. Forrest is a drag queen overprotective mother, complete with an apron, an over-the-top fiery red wig, and a sharp tongue that will threaten you with a jockstrap if you mention any sort of interest in sex, while Marvel Ann is an over-dramatic mean girl who completes the beach with her perfect good looks, classic one-liners (in a romantic air: “Honestly, when I look into your eyes, I see dollar signs!”) and hysterical tantrums that leave the audience speechless or roaring with laughter.

Come see Dominion Stage’s wonderful production. You’ll experience a bellyache full of laughs , and you’ll come out with a smile on your face. This play will brighten your day and convince you to suit up… just don’t forget the suntan lotion!

Running time is about 90 minutes with no intermission.