Purge, by the young Finnish sensation Sofi Oksanen, is an intense exploration of the dynamics of power. Scena Theatre’s production, which marks the play’s regional debut and is only its second performance in the US, is crisp, fast-paced, and enthralling. 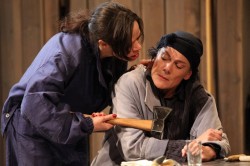 Set in Estonia in 1992, Purge traces the stories of two women who have both been victims of brutal oppression – Zara, who has been held captive and exploited by Russian sex traffickers, and Aliide, who suffered a horrible, life-changing night of torture in the basement of the Town Hall under Soviet Communist dominion. The two women meet when Zara collapses on Aliide’s front lawn after fleeing from her captors. What unfolds is the story of their pasts, as well as their futures: each is given a second chance to choose between solidarity and betrayal, blind self-interest and altruism, oppression and compassion.

Kelly Waters is sensational as the older Aliide. She is strong, convincing, and vulnerable, and the story coheres around her. Irina Koval, as the younger Allide, fully conveys the terror and longing of her situation. Each movement, even her smiles, are fraught with the tension of hiding a partisan she is in love with in her cellar, while entertaining her Communist Party husband in the kitchen above. Colleen Delany’s Zara is fierce, and flips convincingly between vulnerable, wronged girl with PTSD and violent, driven interrogator.

The small, intimate atmosphere of the H Street Playhouse magnifies the play’s intensity, and the simple set – several tiered, wooden platforms on which on all the action unfolds – allows the play’s themes of power and domination to play out starkly and strikingly. The lighting is skillful. At times the stage is softly dappled, signaling a shift in time or mood, and this softening provides relief from the starkness and calls and refocuses our attention. Robert McNamara’s direction is exact and well timed, illuminating the parallels and mirror-imaging that form the play’s structure. In a play that is complex and multi-layered, this deft touch is needed. The dialogue of the opening scene is in Russian, and in an attempt to make it understandable to the audience, subtitles are flashed on a screen behind the actors. Even from the best seats, the subtitles were impossible to read fully because an actor’s head periodically blocked the text. And the action on stage was so compelling it was difficult to keep one eye on the screen. A glossary at the back of the program explicates some of the play’s acronyms and references. Arriving in time to read it is important. The play may well be hard to follow otherwise.

The air-conditioning, which was too loud to allow the actors to be heard, had to be turned off the night I attended, and since the temperatures during the day had reached the high nineties, the theater was a sauna. It is a testament to the play’s power that each seat remained filled, in spite of the heat. More kudos to Kerry Waters, who in each scene wore a heavy coat and a wrap on her head and never lost focus.

This play is not an easy journey for the audience. This is a well-executed tragedy. You will leave wiser, and you will carry the play in your mind for a long while to come. Expect to cry. But also expect to feel purged.

This production contains brief nudity and adult themes and language.