Yes! It is absolutely possible to cleverly condense 186 Hollywood blockbuster films into just two hours of non-stop, off the wall banter and pantomime, with both class and crass. The Reduced Shakespeare Company is at it again with their performance of Completely Hollywood (abridged), a laugh riot that is guaranteed to tickle any funny bone to the point of tears!

Audience members were hilariously heckled, used as live props and kidnapped to for their knee slapping 15 minutes of fame. Think you’re as fast and funny as the reduction trio? Print out a list of all the movies and try your hand at following along, or take a risk and sit up close to suggest movie titles for dissection. 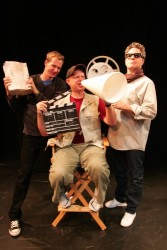 Though a group of middle scholars were front and center, the team continued to perform at the usual level of shameless vulgarity and went as far to mock one for incessantly rustling a bag of candy. Audience members came from all over the area to get unfiltered Reduced Shakespeare and they more than delivered to expectation.

Throughout two acts the tenacious trio tackles chosen films, characters and genres with reckless abandon and framed each skit in the ‘Twelve Steps’ of making a movie and the live stage adaptation of a never before seen script. Movie puns fly left and right at such a speed Roger Ebert would be hard pressed to keep up.

Ferociously funny Reed Martin facilitated not only the kickoff of the entire show, but proceeded to command the story telling of the evening. From flamboyant fancy man to large and in charge evil villain deluxe, Martin attacked each role with flair and humor. A true master of facial muscles, those front and center were delighted by his incredibly realistic impressions and humorous expressions.

Dominic Conti could have reenacted all 186 movies by himself at the rate he was burning up his role. Whether it was running dozens of laps, out kungfuing the crew or dying in a variety of creative ways, the level of physical energy Conti was producing was blistering. His childlike innocence, evocative of every growing pains plot line, won the audience’s heart just as furiously as his array on non-Caucasian wise leaders.

“We’re the Fach Ah Wei tribe. I don’t know where the Fach Wei Ah though.”

The effortlessly witty Austin Tichenor charged his way through each character and absurd costume change with every fiber of his theatrical being. Skipping seamlessly between pompous player and the lovable hero, Tichenor embodies everything a great comedic actor stands for. There is absolutely no question about his dedication to the audience’s entertainment, especially at his own expense.

This is the first show my stalwart theater-hating companion has ever given more than one star, let alone his own five star rave!

Reduced Shakespeare Company: Completely Hollywood (abridged) plays through July 3rd at The Kennedy Center’s Terrace Theater, 2700 F Street Northwest, in Washington D.C. For tickets call (202) 467-4600 or purchase them online. The running time is about 2 hours, with one 15 minute intermission.