Rumple Who? at The Bay Theatre Company

Directed by Jim Chance, Rumple Who? is Will Bartlett’s musical adaptation of the classic children’s tale about a mischievous creature named Rumpelstiltskin who sets out to teach the dreadful Queen a lesson about being too greedy. The production was heartwarming, funny, and engaging. When I walked in the door to pick up my  ticket, I was presented with not a slip of paper, but a  choice of three colors of ink for a ladybug stamp. The non-toxic and acid free stamped ticket on my hand added to the whimsy and fun of the morning spent at the musical. 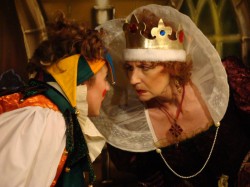 Brett Warner Hurt as Rumplestiltskin and Rena Cherry Brown as the Queen.

As I walked into the theatre, I was curious at first to see how the very intimate and small space would be used. I noticed that the front row sat right on the tiny stage, and the backdrop was that of a distant castle. There were minimal props on stage, and in the far corner, a pleasant landscape was painted on the walls; fluffy clouds offered a 3D effect. While the audience took their seats, the pianist, donning a tiara, played mood music that I can only describe as full of rainbows and blooming buttercups. The little girls in the audience seemed to love it.

When the stage lights came on and the house lights went out, though, I immediately forgot I was in a theatre able to accommodate a mere 85 audience members. Brett  Warner Hurt, who played Rumpelstiltskin, was full of energy and rocked a colorful jester hat and bright tights. She danced and joked her way into the audience members’ hearts, and she really encouraged audience participation. I got a kick out of Ms. Hurt’s portrayal of the “trouble loving” character that sometimes talked in rhymes, and she had solid vocals to boot.

The King and Queen, played respectively by Judson Davis and Rena Cherry Brown, completely stole the show. The King was tall, dark, handsome, and very charming. I thoroughly enjoyed his sweet and honest interpretation of the childish and somewhat weak-willed King. Mr. Davis has a beautiful and full voice, and my only complaint is that he didn’t have more solos. The Queen was equally silly and hilarious, and Ms. Brown seemed to relish having fun with the domineering, wicked mother archetype. Both actors were costumed in over-the-top regal garb, which added to the light and fanciful feeling of the show. The colorful costumes were definitely geared towards children, and they ate it up.

Anachronisms abound (the King mentions his HD-TV and Burger King), and these make the musical even more accessible. The book is silly, and the score follows along perfectly. Pianist Eun Nichols played very nicely, and sometimes even laughed at the jokes cracked by the actors. Amy Kellett did a fine job as the Miller’s Daughter, even though the tessitura of the part seemed a little high for her at times. However, there were some lovely and tender moments in her solos, and Ms. Kellett certainly looked like the quintessential peasant-turned-princess with her big, beautiful doe eyes. Those long lashes later had the audience in stitches as Rumpelstiltskin cast her into a magical sleep that left her cross-eyed and dreamily staring into space. I don’t know  how she did it for so long, but it was a hit with the kids!

Jim Chance must’ve directed the actors to have fun with the show, and they obviously followed his guidance. It was a pure, heartwarming delight, and I caught myself snorting from laughter more than once. Be sure to bring the kids – they’ll love it. Come for the show, and stay for the sundae bar, which they set up after the performance!

Running time is about 1 hour.