Spring Awakening at Frederick Cultural Arts Center: There is Love in Heaven

The City of Frederick is buzzing about a local production that opened on Thursday night to a sell-out crowd and a standing ovation. The Stephen A. Bomango Performing Arts Scholarship Endowment Fund is presenting the “United States Amateur Premiere” of Spring Awakening, the Tony Award-winning musical based on the controversial 19th Century German play by Frank Wedekind. 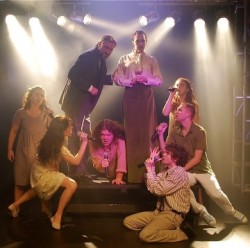 The late Stevie Bomango was a lovable teddy bear of a man who is often credited with founding the theatre community of Frederick, MD. He passed away in 2003, at the untimely age of 47, due to complications resulting from a hernia operation. As the funeral procession of Sheik’s melancholy “Left Behind” played out on the stage, there was not a dry eye among those of us who knew him. We recognized that Spring Awakening is the perfect musical tribute to Bomango’s two greatest loves: the Frederick arts community, and the talented young people of all backgrounds and orientations who grow up there.

The plot concerns a group of teenage students who are struggling to find their identities in a society governed by strict, repressive adults. Their journey to maturity – the Awakening – is at times shocking, at times humorous, at times tragic… but ultimately uplifting. Duncan Sheik and Steven Sater have composed a pulsing indie-rock score that stirs a cavalcade of emotions, and sticks with you long after you leave the theatre. Director Charlie Smith, a local legend in his own right, has assembled a cast of some of the most talented young actors you are likely to see anywhere.

Phillip McLeod and Amy Easton lead the uniformly outstanding ensemble as star-crossed lovers Melchior and Wendla. Bearing a resemblance to young James Spader, McLeod makes a rakishly handsome leading man; his portrait of Melchior is an engaging blend of charm, rage, introspection and torment. Easton imbues Wendla with a heartbreaking innocence and vulnerability. Both actors deliver soulful, earthy vocals, and when they sing together, it’s downright heavenly.

Patrick Prebula brings a manic, punk-rock energy to the role of Moritz, Melchior’s perpetually agitated friend. Steve Custer presents a slightly devilish Hanschen, walking a tightrope between predator and muse in his seduction of Ernst (a bright-eyed David Erwin). Jackie Gaver and Felicia Lobo give standout vocal performances in their respective roles of Martha and Ilse. DC Cathro and Ann Davis display their versatility in a number of adult character roles. Cathro’s silent moment as a father who has lost his son is one of the most heart-wrenching scenes of all.

Smith’s production not only captures every emotional nuance of the piece, it is also a technical work of art. I have never seen a Frederick musical production with a more sophisticated sound and lighting design (credit goes to Greg Davis, Nick Brown, and the five piece band under the direction of Alison Shafer).  This production practically transports the audience to a rock concert setting.

In its musical form, Spring Awakening continues to bear a scandalous reputation, but in spite of some explicit lyrics and graphic sexual situations, the “nefarious” events in this play are simply those that confront all teenagers. In fact, one might argue that parents should attend this play with their teenagers as a springboard to launch dialogue about teenage sexuality and the potential consequences of sexual activity. The production does contain full-frontal nudity, which Smith handles tastefully through use of haze and backlighting.

You don’t want to miss this exciting local premiere. It’s a powerful production, and in conjunction with the legacy of a special man, a worthy cause, and a passionate community – it all adds up to something more.

See it, and you will believe.