How do you spell Keegan Theatre’s rousing and sweet and often touching production of The 25thAnnual Putnam County Spelling Bee? (‘Spelling Bee’) F-A-B-U-L-O-U-S and W-O-N-D-E-R-F-U-L! Everyone in town seems to have this show on their season schedule and I’ve already seen three other local productions, but this Keegan Theatre production is the most endearing, heartwarming, and the funniest I’ve seen. It’s pure joy! 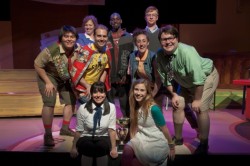 Spelling Bee is 90 minutes of uninterrupted fun (there is no intermission). Written in 2004, and conceived by Rebecca Feldman, it has music and lyrics by William Finn (Falsettos and A New Brain), and a funny book by Rachel Sheinkin. Jay Reiss contributed additional material. Six contestants –a little wacky but endearing – meet at Putnam Valley Middle School and compete in The Bee. Three adults – who are also a little “off the wall”- run The Bee.

The 2005 Broadway production, which was a hit – and ran for over 1,100 performances after transferring from Off-Broadway’s Second Stage – was directed by James Lapine. Rachel Sheinkin won a Tony for her very funny book. As in the NYC production, audience members are selected to be spellers and join the six contestants on The Church Street Theatre Stage, where they dance alongside the spellers until they misspell a word.

At the performance I attended, the audience members spellers were given fairly easy words to spell, including “cow” and “Mexican” which irked several of the other  contestants, who were given much difficult words to spell. The book was updated to include references to Sarah Palin and Andrew Weiner. You can only imagine the laughter that erupted in the theatre when the twittering Congressman’s name was read! I don’t want to give away any more of the jokes, but suffice to say there are many more awaiting you when you attend this special production.

Which leads us to this fabulous cast – filled with some of our best local young talented actors and singers. Vocally, this is the strongest group of singers I have seen in a production mounted since the Broadway production. The harmonies on the opening title song were heavenly, and right then I knew we were in for a fantastic evening of singing and acting. More wonderful harmonies were delivered in “The I Love You Song” by Madeline Botteri (The assertive Olive Ostrovsky), RaMond Thomas (Mitch/Dad), and Katie McManus (Rona/Olive’s Mom).

Each one of the characters and actors has their “moment in the sun” as composer and lyricist William Finn has written each of them an “11:00 number” where we learn all about these young spellers’ backgrounds and fears. Olive (Ms. Botteri) sings about her friend the dictionary and how she yearns for her mother to return from her travels to be with her. Leaf Coneybear, played by Keegan regular and loveable Michael Innocenti, sings “I’m Not That Smart” telling how tough it is for him to be among legitimate champions – when he finished third in his district because of “Jewish” circumstances, and when his family laughed at him and questioned his intelligence. William Barfee, (pronounced Bar-Fay) played by Dan Sonntag, a regular in many Toby’s Dinner Theatre productions, has severe nasal problems, and sings “Magic Foot” showing his unique way of spelling out words. It’s a tour-de-force with Sonntag dancing and sliding across the stage – tearing up the place! Here Sonntag makes the foot-speller more endearing, sweeter and more real, and because of that – the ending of the show now makes perfect sense. It’s a nice change from all the nasty and obnoxious portrayals of Barfee I have seen in those other local productions. Sonntag and Botteri singing the duet “Second,” was the highlight of the evening for me.

Christopher Mueller plays last year’s champion – the arrogant and “rising” Chip Tolentino with gusto, and sings the heck out of “Chip’s Lament” which gives new meaning to ‘stiff competition.’Mueller has powerful lungs and a gorgeous voice, and it’s on full display in this show-stopper, as well as in the ensemble numbers. Tina Ghandchilar is tough as nails as Marcy Park, the girl who speaks 6 – No! 7 – languages. She’s all business and when she delivers “I Speak 6 Languages” she has the audience in the palm of her hands, and proves that sometimes change is good. Shayna Blass is a blast as Logainne Schwartzandgrubennierre, the girl who has two fathers and is under constant pressure to win The Bee. Her rendition of “Woe is Me” tugged at my heart and was so moving. Audience members to the right of me were wiping away tears. You gotta feel for this kid!

And now to the three adults who run The Bee. Katie McManus is endearing as Rona Lisa Peretti, the emcee and moderator. Her gorgeous voice fills the theatre during the opening title song, as she has a “syzygy” moment recalling when she won The Third Annual Putnam County Spelling Bee, and in her two “Rona Moments.” RaMond Thomas as the assistant, juice-box giver, and comforter Mitch Maloney, and Dan Van Why, who plays Douglas Panch, the official word reader, provide a lot of laughs. Dan’s dry delivery of the responses to the “Can I have the word in a sentence?” requests are hysterical. I don’t know who wrote the “current” material – but whoever you are – take a bow and a box of apple juice!

Director Christina Coakley keeps the show moving at a fast pace and ensures that no one on the stage over-acts, which I have seen in so many other productions of The Bee. Shadia Hafiz’s costumes compliment the personalities of the spellers, especially Coneybear’s colorful cape. Jake Null’s sound is crisp and clear. George Lucas’ simple set is perfect for the production. You feel like you are right there in that gym sitting alongside those spellers, and the focus is on the spellers not the set – a very smart choice indeed! Melissa Douglass Bustamante’s choreography is sheer fun and I love the “kick line” during one of the big numbers (don’t want to give it all away). Hannah Dubrow provides the lighting design and I admire her beautiful lighting for “The I Love You Song.”

Bee-warned! Run and get tickets to The 25th Annual Putnam County Spelling Bee now. Bee-lieve me, it’s going to sell out!

Running time is 1 hour and 40 minutes without an intermission.