If you are looking for a historically accurate, rigorous, or scholarly exploration of Shakespeare’s literary canon, look elsewhere. 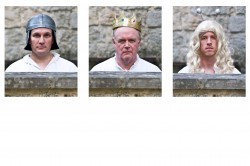 Scott Graham, Frank B. Moorman and John Miller from The Complete Works of William Shakespeare (abridged). Photo by Teresa Castracane.

The Complete Works of Shakespeare (abridged) is written by Adam Long, Daniel Singer & Jess Borgeson. While the playwrights must certainly be experts and lovers of Shakespeare, they do not present The Bard’s work with any of the reverence that he has amassed ever the centuries. Instead they question his reputation through absurdity and satire, turning all of Shakespeare’s writing, even the tragedies, into a spirited farce.

The Chesapeake Shakespeare Company’s Ellicott City production of The Complete Works of Shakespeare (abridged), directed by Scott Alan Small, will be playing for the next month at the early 19th century ruins of the Patapsco Female Institute. The pastoral setting allows for a unique theatre experience. It is a chance to have fun with Shakespeare in the outdoors, just like audiences of the late sixteenth century did at the Globe Theatre. The viewing area is a small nook facing the stage set, which was seamlessly built by Set Designer Heidi Busch’s – using two walls of the restored ruins as a backdrop. It’s simple but effective, creating the aesthetic of a drama class or an actor’s workshop

The austerity of the historic venue contrasts with the levity of the performances. The three actors introduce themselves, using their real first names, as members of the “Reduced” Chesapeake Shakespeare Company. They are the only remaining actors in the company and are stuck performing all of Shakespeare’s plays and sonnets in one night. In their desperation they break the fourth wall and solicit help from the audience. Scott (Scott Graham) is the ringleader and audience surrogate. Johnny (John Thomas Miller) is the comically inexperienced apprentice. Frank (Frank B. Moorman) plays an amateur Shakespeare scholar, overflowing with seemingly unearned bravado. The three actors argue about how they can possibly cover nearly forty plays and eighty sonnets in only an evening. Their conflict as they struggle through their own versions of Shakespeare forms the central narrative.

Scott, the reluctant host, tries to mediate disputes between Frank and Johnny. Johnny cannot see why Shakespeare is so popular and respected. Frank is on the other end of the spectrum, taking a bombastic, professorial approach to The Bard, which pokes fun at the futility of the many academic debates about Shakespeare. Why are some considered lesser plays? Which is the real version, folio or quarto? The play has one answer for both: it doesn’t matter  – just enjoy the show!

The trio’s comic timing as a group is remarkable. For portions of audience interaction in the play, improvisational skills from the actors is essential, and all three have the chops. Their charisma was infectious, which can be no easy feat when performing outdoors without microphones. Miller is a particularly hilarious comedic actor. Moorman is perfect as the amiable buffoon. He hints at having played Lear in days gone by, and indeed his dramatic acting skills emerge in a brief moment of gravitas while reciting the “What a piece of work is man” speech from Hamlet.

The playwrights, in deference to Shakespeare’s penchant for bawdy puns, were sure to include some suggestive wordplay, while not being explicit. The play is also full of superbly executed physical comedy, which will no doubt appeal to the younger members of the audience. With enough culture for the adults and silly-string vomit for the kids, The Complete Works of Shakespeare (abridged) is designed for all ages.

The lighting by David Smith is gentle, even, and not overwhelming. Colored lights are used sparingly for the climatic scenes. Kristina Lambdin’s costumes are simplified versions of period dress initially, but soon become hilariously anachronistic as the players keep changing to keep up with all of the parts. A similar comedic effect is provided by Pam Weiner’s absurd props.

The entire team of the Chesapeake Shakespeare Company has done a great job at keeping the focus on the on the interplay between the three characters. They did not fall prey to the pageantry and over-production that comes hand-in-hand with Shakespeare. After all, that is exactly what the play is lampooning.

The Chesapeake Shakespeare Company’s The Complete Works of Shakespeare (abridged) is playing through July 24th I n repertory with A Midsummer Night’s Dream. Check the show schedule and/or buy tickets online or call (410) 313- 8661. Running time is 2 hours, which includes a 15-minute intermission. The gates to the park open 90 minutes before showtime for picnicking, and there is pre-show entertainment – which includes jugglers, musicians, and stage combat demonstrations.