The Glass Menagerie at Arena Stage

Partnering with Arena Stage’s Mead Center for American Theater, Georgetown University’s Theater and Performance Studies Program has created a sensitive, energetic, and finely tuned production of Tennessee William’s Glass Menagerie. The Glass Menagerie is considered to be William’s most autobiographical play. In St. Louis of the 1930s a young man struggles to carve out space for himself while living in a tenement apartment with his overbearing mother and his sweet but shy, lame, and troubled sister. As the family’s primary breadwinner – his father having long since run off – the young man, Tom, is forced to work in a warehouse, in spite of his thirst for adventure and his burning ambition to be a writer. His sister, Laura, is unemployable – her only hope is marriage. Tom’s mother badgers him into inviting a work companion home for dinner so that Laura might have suitor. The evening takes unexpected turns. Nothing will ever be the same. 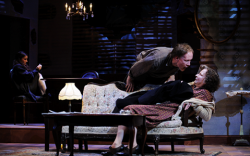 The production is part of the Tennessee Williams Centennial Festival, and the prolonged and thoughtful focus on the legendary playwright and his work is apparent in director Derek Goldman’s careful choices. Williams always regretted that after he left home his beloved sister Rose was subjected to a lobotomy. The moment when Laura’s favorite glass miniature, a unicorn, becomes like the other horses is played slowly, with quiet intensity and seriousness. Allowing this scene to resonate with poignancy and form the emotional heart of the play, Goldman also manages to illuminate Tom’s flight. Tom knows he is more than a warehouse worker, and he will not be broken – he will not conform. Laura’s limp in this production is barely detectable. It seems just another bit of uniqueness that cannot be appreciated in a world demanding normalcy.

Rachel Caywood, a recent Georgetown graduate, is well cast as a fragile and quietly tragic Laura. Jim O’Connor, played with great verve and aplomb by Michael Mitchell, is riveting as the well-meaning, conceited, and obtuse gentleman caller. Sarah Marshall steals the show. She fully inhabits the role of former Southern belle turned scrappy, indomitable hustler. The broad planes of her accent are wonderful and with every gesture she solidifies Amanda’s character of gentility and steel. Even at her most domineering, she is lovable. Clark Young, as Tom, shifts convincingly between love for his family and restless longing. He is tense, explosive, and by turns tender and brooding.

Robbie Hayes’ creative set juxtaposes poverty and shreds of opulence. The apartment’s walls are shot through with large holes and ragged wooden beams are visible through the plaster. A metal grate in the foreground suggests a gutter and the “terrace” – the characters refer to is a landing one flight up on the fire escape. Yet lace curtains, ceremoniously opened and closed at intervals, separate the parlor from the dining room. Evenly spaced video panels over above the ragged walls fulfill Tennessee William’s initial vision. The script calls for screens on which to project “magic-lantern slides bearing images or titles.” This element was omitted in the original production and in most subsequent productions. But the video images play an important role. As the blue light of lit streets rolls across the screens, interspersed with neon-like reds, we are reminded of the gritty, urban night beyond the walls where conversations unfold in the soft accents of the southern aristocracy. In this well conceived and beautifully acted production, The Glass Menagerie glitters.