The History of Kisses at The Studio Theatre

The first and final words in this one-person production of David Cale’s History of Kisses, which is now in its premier run at DC’s The Studio Theatre, belong to a washed-up old salt. His name is Robert Grundy. After an apparent mid-life crisis (and several decades of The Queen’s navy), he’s decided to head from London to the beaches of California, armed with his penny whistle, to live his dream. So he’s in his motel room on the California beach, rehearsing for a weekend festival being held at a local Maritime hall, where he hopes to spend some time performing “sea shanties.” Those are the sort of tunes that old sailors used to sing when scrubbing down the decks, weighing anchor, or hanging around whorehouses. 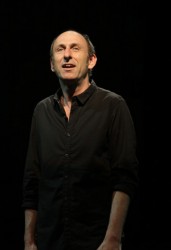 David Cale in The History of Kisses. Photo: Carol Pratt.

That dream-inspired trip to America, no coincidence, is reflective of the true story of playwright/performer David Cale himself, who started out as a pub-rock singer, then haunted the London underground with old Irving Berlin songs. At the age of 20, he headed to New York City, and began his career as a singer-songwriter-writer. Since then, he’s developed an impressive resume juggling all three professions, and probably a few more.

Cale’s character, Grundy, is the gem of The History of Kisses.

In this very wordy 90-minute piece, though, most of the stage time goes to his neighbor at the beachfront motel. And that man is James, a….writer, who also, undoubtedly, drawn from David Cale’s own experience, and, also, played by Mr. Cale himself. James has come to the motel inspired by the desire to complete a series of interlocking stories, which revolve around kisses. So, with one ear on the room to his left, James is listening to Bundy rehearsing his sea shanties. In the room to his right, he’s pressing his ear against the wall, listening to the wild orgasms, and imagining the story behind the kisses, of an unknown couple. James gets more involved in the story than he planned to; the story of his characters becomes his own search for love, and the resulting opus gains added intensity.

Things look promising at the 15-minute point. Three distinct characters come into play: The old British salt, the sexually boxed-up writer, and then Lisa, a friend of the writers who is celebrating her ex-husband’s infidelity with a mid-life fling with a mustachioed Portuguese. Later, we are graced with other characters – most memorably, Judy Garland in her drinking days. All of this occurs by the seashore, where ships pass in the night, and time is measured by tide. In a low-key performance Cale slips easily from one character to the next. He’s a storyteller first, and a performer second. As he switches from male to female, from American to Australian to British, he maintains a gender-switching likability, and a keenly sensitive desire to link with his characters and himself.

I’m not going to get into the individual narratives. They link together cleverly, and the story’s most appealing moments occur, when the protagonists of one narrative brush up against – or pass by – other protagonists. Those delights are largely cerebral. I got the idea that they would be equally, if not more satisfying, heading down I-95 listening to them on CD, or perhaps on ‘This American Life.’ That’s not a belittlement: there were moments when the stories linked in ways that would have made a replay worth it.

But The History of Kisses isn’t a book, it’s a play, located on The Studio Theatre stage, painstakingly altered to replicate a beach. As drama, History… adheres to a drearily recognizable template for the Uplifting Dramatic Monologue. We begin with, the low-key, self-deprecating narrator. Then, the serious characters. Then the crazy, kooky characters. The insertion of naughtiness and innuendo, followed by an almost Oprah-esque revelation, tempered with atmospheric melancholia.  And however unpredictable and reckless kisses are, the narrator of The History of Kisses toes the line.

There are moments of keen insight and emotional uplift here, especially for the middle-aged contingent who assume that their best kisses are behind them. As his character Robert Grundy tells us in the play’s opening song, it’s time to set sail and “head for parts unknown.” When it finally happens, in this play, we wish the writer had taken that advice a little more to heart. Like many monologists, Cale unintentionally exposes his inner control freak here, even in the name of emotional and sexual liberation. At its best, The History of Kisses and its characters flow with the tides. In its less fortuitous moments, Cale seems to have diverted these stories into his own emotional reservoir. There’s nothing wrong with having your own personal water supply, of course. But either in the theater or on the beach, at least to this reviewer, it’s a lot more fun watching the surfers wipe out than listening to someone make sense of it all.