The Merchant of Venice at Shakespeare Theatre Company

From the start – the Shakespeare Theatre Company’s version of The Merchant of Venice crackles with electricity amid the hustle-bustle of a large commerce-driven metropolis. On a one-size-fits-all set, trisected by levels and diagonalized by a sweeping three-story staircase, booze-fueled revelers burst through a set of wooden doors in a crazed conga line as they whirl past the train station’s café and into the ether of billowing locomotive steam. The set seems lifted from the Main Concourse at Grand Central Station in New York City, and that’s a good thing because this version of Shakespeare’s familiar tragicomedy has been shape-shifted into The Jazz Age of the 1920’s and launched into the era of hot flappers and cool bathtub gin.

In a sweeping reinterpretation of the characters by Director Ethan McSweeney, the beguiling Portia is depicted as a horseback riding, golf-playing heiress and The Prince of Arragon as a mincing, 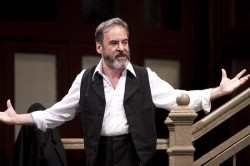 Mark Nelson as Shylock in The Merchant of Venice. Photo by Scott Suchman.

Pekinese-toting yachtsman. In this version of the classic tale, Antonio, the cocksure privateer, becomes a self-absorbed commodities trader and The Prince of Morocco, an aviating daredevil playboy. Try envisioning The Little Prince on Viagra.

On a more serious note, Mark Nelson’s Shylock shows a grim yet brilliant accuracy. His portrayal of the vengeful moneylender, written as the quintessentially unflattering stereotype of an Orthodox Jew, one whose sense of justice outweighs his sense of mercy, is unflinching. The outcast, as it was written, is a despicable man worthy of inclusion in a Nazi propaganda film short. Its no wonder Jewish actors like Theodore Bikel have turned down the chance of appearing in Shakespeare’s play. But stop a moment to recognize its worth in the play, it’s no more and no less than a racist characterization and there are countless plays and ethnically-correct actors cast in these thorny roles daily.

Keeping to the new pattern, regional New York and British accents are cleverly tweaked to fit by dialogue coach Deena Burke, with Gratiano, Salerio and Solanio as Bowery Boys; the Duke of Venice as a dese-dem-and-dose mobster; Shylock as a Yiddish-accented Hassid straight out of Williamsburg, Brooklyn; and Portia as an upper crust Brit on a charm mission. Reattach the untinkered-with script, et voila! – a fresh new dynamic. It’s Shakespeare meets F. Scott Fitzgerald on the Lower East Side of Venice.

And least you imagine the production to be tarted up by bold primary colors, knowest all who hearest this proclamation, that the set, designed by Andrew Lieberman, in understated shades of grey, beige and blue, doesn’t distract from the bard’s masterpiece of comedy and still-relevant social drama.

I took as my escort my 13 year-old grandson whose knowledge of Shakespeare was A Midsummer’ Night Dream read in dreary black and white (dull compared to the Internet and the technicolor graphics of video games). He was not expecting, nor I, the modernist spin given to the play and he sat up with eyes wide open enjoying every action-packed minute of it, most especially the dramatic arrivals of Portia’s suitors.

This is a Merchant of Venice packed with panache and sprinkled with roadsters, radios and champagne toasts.

The Merchant of Venice plays through July 24th at Sidney Harman Hall, 610 F Street, NW, in Washington, DC. For tickets and information call (202) 547-1122 or purchase them here.