the shape of things at The Colonial Players

As the lights come up for a brief intermission, the woman next to me sighs heavily to her companion: “I’m sick of these people.” Neil LaBute would be proud. His play the shape of things, directed by Gary Seddon, is a raw look at what happens when the line between art as representation and art as life is blurred beyond recognition. 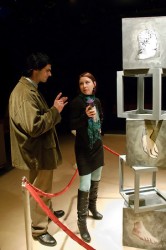 As the audience finishes filtering in, they look up to find Adam (Pat Reynolds), a college student who works as a museum security guard, perusing an exhibit absentmindedly in a heavy corduroy jacket. His hangdog look, engineered by Costume Designer Linda Swann, complete with shaggy black hair and glasses – broadcasts that he is someone with a not very high opinion of himself. Enter Evelyn (Karen Grim), an art student bent on defacing a statue that has been censored with plastic grape leaves. “They objected to his thing, the shape of it,” she tells Adam. The dance Reynolds and Grim do around the statue (and that she does around him) is perfect; Adam recoils from Evelyn’s quick intimacy and brazen physicality. Evelyn spray paints her phone number inside of Adam’s jacket and, when he leaves, turns her weapon of choice on the statue. She’s screwing with Adam from minute one, but it is to Grim’s credit that this revelation is drawn out.

The timeline of LaBute’s play moves quickly. Adam and Evelyn quickly become a couple and Evelyn encourages him to drastically change his appearance; Adam loses weight through her exercise regimen and even goes through with a “procedure” to enhance his nose, which his friend Phillip (Lawrence Griffin), the only person willing to call Evelyn on her BS, finds laughably outrageous. Phillip’s girlfriend Jenni (Stephanie Morelli) finds some of the changes in Adam to be applaudable. “What you’ve done with Adam is really great,” she tells Evelyn. Evelyn is quick to correct her: “He did it.”

Laurie Nolan’s set allows the actors to skillfully navigate among a museum, a restaurant, a park and a bedroom, and the cast is terrific! In one scene, Reynolds and Grim lounge on a bed supported by stacks of folded t-shirts and jeans. A video camera on a tripod is trained on the couple and a fog of red light by Ian Belanger creates a bedroom scene akin to the one that opens the Academy Award-winning film American Beauty. Evelyn tells Adam to “smile into the camera as long as you possibly can” and you begin to pity him. Evelyn ‘tells’ Adam to do lots of things. The closing scene in which Adam essentially tells Evelyn to do something anatomically impossible falls on deaf ears. His inarticulateness is laughable to her. Who can blame him? We are equally as appalled, perhaps more so because these people are some of the most achingly real to trip all over the stage. Alex Baños’ choice of music that ends the production is almost as surprising as the end of the play. It’s a surprise that is well-earned.

Because the production is staged in-the- round, it blocks the view of half of the audience from seeing certain characters’ faces at critical moments in the play. Here’s a suggestion: what if seating was taken away and we, the audience, were given the choice of standing and moving around the perimeter as if we, too, were in a museum?

Running time is 2 hours and 15 minutes, including intermission.