Vandergrift! at The Greenbelt Arts Center

Vandergrift!, now playing for three consecutive weekends at the Greenbelt Arts Center in Greenbelt, Maryland, tosses its hat into the ring of history and tells the story of the little town that proved it could survive through five decades of America’s highs and lows. The dream child of steel tycoon George McMurty, Vandergrift, we learn, is a planned community named after J.J. Vandergrift, a director of the steel company. The play is based on the inspired vision of George McMurty who designed Vandergrift, PA making it the first successfully planned industrial town sold to the workers as an incentive for their loyalty. 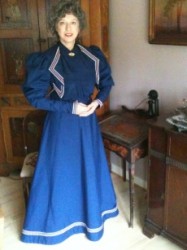 McMurty, born an orphan in Belfast, Northern Ireland, immigrated to America to find himself as well as his fortune. After joining the Union Calvary, he became a Major during the Civil War and eventually landed a job with the Jones & Laughlin Steel Company in Chicago.  His success there lead to his presidency with the Apollo Iron & Steel Company in PA.

As the play opens, McMurty shares his passion, self-serving though it may be, of designing a town that would be considered, “something better than the best!” Jan Forbes, who plays McMurty, brings a rugged but warm charm to his character.  I found his performance honest and his character accessible.

Tim Wolf as Frederic Law Olmstead, Jr., the talented architect, had an eye-catching swagger and ease. He gave Olmstead the right carriage for a man so famous for his designs of New York City’s Central Park and the grounds of the United States Capitol among other design achievements. As designer of the curved streets and parks of Vandergrift, Olmstead had constant reservations about the Municipal Center facing the company mill.  It seems it was as true then as it is now that government keeps an eye on business while business keeps an eye on those who govern.  Bruce Smith, who portrayed the President of the Steel Company, turned a blind eye to all but the profits of industry.

Ida Tarbell, the insightful, iconoclast played by director/actor Helenmary Ball, asserted herself as a journalist with an eye for cutting through the trickery of McMurty’s dream town. Ball gives Tarbell the strength of her convictions yet we are to learn by the end of the play that even Tarbell caves in to the overwhelming pressures of “belonging” to society’s inner circle. Having told the audience that she “gave up heaven in college,” we nonetheless see her in later years heavy with concern for her mortal soul and persuaded to give religion a second chance. Tarbell’s ability to label John D. Rockefeller as a “felon,” seems to have made only temporary traces of raised consciousness as evidenced by her later pride in working with President Wilson, a racist who fired African Americans from Federal government posts and segregated the US Navy.

Ball assumes the role of Tarbell with a graceful authority.  She often pounces on the hypocritical deeds of the “tyrants of steel” and often holds high the unwelcomed mirror reflecting the discrimination and fear of union control which is the secret behind the design of Vandergrift’s, “a worker’s paradise.”

Bruce Brennen, as the Scottish mill worker with union interests, gave a compelling performance throughout.  Sherman McDaniel brought laughter and realism to her role as the fortune teller. The saucy, barefooted prophet gave the audience a card reading peek at the soon to come turning point in Vandergrift’s history.

A.O. Gutierrez should be applauded for the creative design of the set, lighting and construction.  I thought it especially creative to have changing pieces of memorabilia placed against the black and white overlapping pages of newspaper stories. I enjoyed the street lamps – which when moved from scene to scene – set the mood amid lovely tree- lined streets, and later at a busy train station where highly anticipated guests were expected to arrive.

I also thought the music during the scene changes was particularly well chosen and helped the audience reminiscence the many decades celebrated throughout the play. Ball, who tripled as the Costume Designer, skillfully stayed true to the essence of each period.  I loved her dressing of the three steel executives who opened the show. Their uniformity of dress set the audience’s mind in the direction of “big business” being of one accord.  Only the brightly colored ties gave a hint of their personal tastes. The white lace dresses representing the early 1900’s were nothing short of beautiful, and perfectly expressed the genteel life experienced by the near-do-wells of Vandergrift.

Though the actors had more synergy during the second half of the play, I’m betting that their performances will grow stronger with each show.  Playwright, Anthony Gallo can be proud of his effort. I found it a nice touch that descendants of the main characters in the audience were introduced at show’s end. Tony shared with me that Zappan Wilder, nephew of Thornton Wilder, a friend of Olmstead, had expressed an interest in the play.

If you love the history of small towns in America, you’ll enjoy Vandergrift! From what I understand, Vandergrift, PA still stands 80-90% intact. I think I’ll visit it sometime this summer.

Vandergrift! is produced by the Seventh Street Playhouse, and plays through June 12 at The Greenbelt Arts Center; 123 Centerway, Greenbelt, MD.  For tickets call (202) 544-6973.  Running time is just over two hours with one intermission.