Wicked at The Kennedy Center: Rhapsody in Green

Wicked has established itself as the most beloved new musical of the 21st Century thus far, and the excellent production currently in performances at the Kennedy Center s makes it clear why. Based on the novel of the same name by Gregory Maguire, Wicked is a clever, compassionate telling (and retelling) of the story of Elphaba, the Wicked Witch of the West in the L. Frank Baum Wizard of Oz books and in the famous 1939 MGM film version. The musical features a mostly “wonderful” score by Stephen Schwartz and includes some songs that have become ‘popular’ at concerts and cabarets as well as on television (e.g., Glee) including “Defying Gravity” and well, “Popular.” Wicked had a record-breaking run at the Kennedy Center in 2005, and happily is back here for the summer. 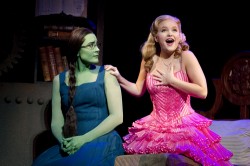 This production features Dee Roscioli, as a very strong and relatable Elphaba. Roscioli is noteworthy for having played Elphaba in more performances of Wicked than any other actress, and it shows on stage. She has a gorgeous, pure and yet powerful voice that transports you over the rainbow in the show’s many power ballads (“Defying Gravity”) as well as the softer ones (“I’m Not that Girl”). Roscioli’s stellar performance moves the audience to root for her green and reviled character all the way through.

The Tony Award-winning sets by Eugene Lee are awesome, including an eye-popping moving clock dragon that sits above the stage. The set deviates somewhat from the MGM vision of Oz but the Emerald City still dazzles and the Shiz University sets are especially good. The colorful Tony Award-winning costumes designed by Susan Hilferty are nothing short of fabulous. Kenneth Posner’s sophisticated lighting design helps set the appropriate moods. There are some magical special effects throughout the show that both thrill and propel the story forward. Significantly, Tony Mineola’s sound design is also very good, and one can hear the mix of smart and more mundane lyrics sung clearly.

As big of a show that Wicked is, it really has heart too. It is a story about an unlikely but enduring friendship between two opposite types of women, one caring and environmentally-minded, and the other more superficial and political, but both vulnerable young women. Unlike most musicals that focus on a romantic relationship, Wicked plays the friendship between the two witches front and center throughout the show with the romantic aspect relegated to a subplot. I believe that show has been so successful because everybody, young and old, loves to celebrate an unlikely and durable friendship, especially when those two friends both sing so beautifully. The duets among the witches, including the touching “For Good,” are among the many highlights in the show.

Although the book by Winnie Holzman can be somewhat overloaded with plot, the show is full of sly, humorous references to The Wizard of Oz film. We learn the origins of the iconic ruby slippers, the flying monkeys, Dorothy’s tornado and our favorite Oz characters. In Wicked, nothing is as it seems to be and we are constantly surprised and delighted.

Good News – the Witch of The West is here – in our area all summer, sounding as good as ever. Don’t miss her!

Wicked plays through August 21st in the Kennedy Center Opera House, 2700 F St NW, in Washington, D.C. For tickets call (202) 467-4600, or purchase them here. Running time is approximately 2 hours and 45 minutes with one intermission.

This production is appropriate for children 8 years and older.