OutOftheBlackBox Theatre Company in cooperation with Greenbelt Arts Center presents Young Turg; a play that questions the notion of whether or not one can succeed in the theater business without endangering personal ethics or artistic expression. Directed by Betsy Marks Delaney, this play follows an ambitious, aspiring dramaturg as she tries to survive – and thrive – in the brutal business we call “show.” 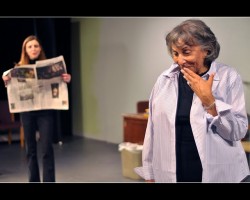 Betsy Marks Delaney and Eric Henry skillfully design the set with consideration to a thrust theater (a stage that is surrounded by audience on three sides). It details a realistically cluttered office, using haphazardly stacked paper boxes to cleverly outline the stage and separate the show from the audience. Ben  Giblin does a fine job as lighting director, as does Scott Candey the Light Board Operator, and Scott Bloom is on cue as sound designer, delivering effects such as a ringing telephone with precision. Betsy Marks Delaney and Linda Swann prove to be successful costume designers as well, dressing the actors in smart business-casual attire, the stereotypical thespian black turtleneck, and heels that can easily take an eye out.

Caity Brown does a great job portraying Heidi Bishop, an enthusiastic intern for sarcastic and bitter dramaturg Jim Foley, played by Eric Henry. Jim has become jaded, bitter, and set in his ways, and discourages Heidi’s optimism, telling her “this office is where theater goes to die.” Undaunted and determined, Heidi fights for change in the workplace, specifically concerning a monologue by one of her favorite playwrights, Tina Fike, wonderfully played by Sandra Cox True. Heidi is proud of her seemingly successful efforts, until she realizes that the theater boss, John Braschi, played by Ryan “ryknow” Willis, has manipulated her into an upsetting situation. Will she be able to restore peace in her workplace without ruining her reputation in the process?

While the performances are good, the play itself proves disappointing. Diction abruptly changes from lofty and supercilious to crass, and the characters use grammar and vocabulary more akin to a term paper than real life. The dialogue is awkward, and for the most part does not truly reflect how people communicate. While the plot drags along at a fairly dull pace during the first act, the second act moves along at a much faster clip and proves to be much more entertaining. What is missing is balance and consistency. It is better to be mildly entertained throughout the entire show then bored during the first act and immersed during the second. There is a moment in the play where Heidi laments that most scripts nowadays are about young dramaturgs battling the hostile business world, and John quips back with, “Who wants to see that?” While this did earn laughs from the audience, and the play was successful in poking fun at itself, I could also not help but nod my head in agreement.

Young Turg plays through July 3rd at Greenbelt Arts Center, 123 Centerway, in Greenbelt, MD. Purchase tickets by calling (301) 441-8770 x3, or by ordering them online. Running time is 120 minutes with a 15 minutes intermission.