A Chat With The Puppet Co.’s Christopher Piper

The Puppet Co. is like an old-fashioned movie house but instead of film, puppet shows for all ages are the main attraction. It is located in Glen Echo Park, a beautiful hidden treasure in itself, just outside of Washington, DC. From my first friendly contact with Erin Gifford, the Public Relations Manager and House Manager, to my arrival and warm pre-show introduction by  MayField Piper. I had the feeling that I was meeting an ilk of gracious people that one doesn’t come across everyday. Their period early 1900’s costumes added to the charm.

Christopher Piper is a founding member of The Puppet Co. He, too, has an old world charm and is very at home on the stage. He is a jolly looking fellow who one can easily imagine being cast as 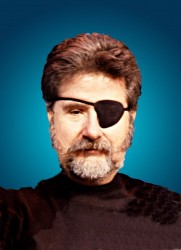 Santa Claus, Maurice from Beauty and the Beast or Geppetto. As I witnessed while taking in his current production, The Wizard of Oz, he has a way with puns and reworking classics to make them fun and accessible to today’s child. Christopher shared with me some background on his magical theater. We hope this is part one of several articles on the art of puppetry.

Teresa: How did The Puppet Co. get started and how long has it been in existence?

Christopher: The Puppet Co. was founded in 1983 by Allan Stevens and myself. MayField Piper and I were married in 1987, and she joined the company that year. The first Playhouse in Glen Echo Park was opened shortly thereafter. The third and latest incarnation of the Playhouse opened in 2004. It was designed by the founding members, from the ground, up, specifically for the art of Puppetry.  It is  one of a few such in the country.

Introduce us to the puppeteers from The Wizard of Oz?

Nora Achrati returns after her role as Snow White to play Miss Billy and Dorothy. Allan Stevens plays Jack and the Tin Woodman, I play Ray and the Scarecrow, and Eric Brooks plays Burt and the Cowardly Lion. Brooks started as an intern and has been with the Puppet Co. for nearly five years.

How do you choose your shows, particularly, The Wizard of Oz?

The Puppet Co. specializes in classic fairytales and children’s literature, preferring tales that have stood the test of time, and giving them a modern bent to fit current mores. Their goal is to create superb theater that is accessible to children. The epertory includes a range from Little Red Riding Hood and the 3 Little Pigs (as told in rap by the Big Bad Wolf), to Alice inWonderland to A Midsummer Night’s Dream.

The Wizard of Oz was first produced in 2000, the 100th Anniversary of the publication of the first Oz story. We wanted to commemorate the occasion by following the book as closely as possible. There are many characters that appear in the Puppet Co. production that do not appear in 1939 MGM movie.

What is the origin of the puppets and sets in The Wizard of Oz? Is the scale the same for all of your shows?

Aside from guest performers, everything you see and hear onstage:  scripts; music; puppets; costumes; scenery, is created by the Puppet Co. staff, with few exceptions.   The puppets have a general style that reflects the skills and talents of the Puppet Co. artists, yet vary from show to show to fit the texture of the story, and the manipulation style the production requires. A hand puppet production of Rapunzel is by necessity smaller than The Nutcracker in which larger-than-life costume characters fill the stage. Puppets range from three inches to 12 feet tall. 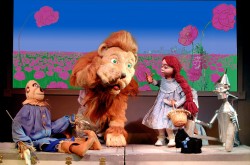 Dorothy sings to her friends about the virtues of home, sweet home. Photo by Christopher Piper

What unique challenges/difficulties did you meet in bringing The Wizard of Oz to the stage with puppets?

The greatest challenge was to distinguish the production from the MGM movie.  The movie is very clever in selecting simple plot points and fleshing them out into a gorgeous musical movie. The Wicked Witch of the West is used as an antagonist from the outset, and appears throughout the movie. In the book, she gets one small chapter.  In fact, the book is quite episodic, and there is not a strong plot.  This makes wonderful bedtime reading, but is not so easy to present as a stage play.

By making the tale a story within a story, the episodes are linked together by the conflict of finding the lost little girl’s family at the Kansas State Fair. This device also allows the puppeteers to move more freely on the stage, working the puppets while in plain sight of the audience, rather than hiding behind a curtain. This brings a new facet to the line, “Pay no attention to the man (or woman) behind the curtain.”

Tell us about other shows you’ve produced in the past and shows we will see in the future at The Puppet Co.?

The Puppet Co. is a repertory company with a stable of 22 productions in a wide variety of puppet styles. There are actually two productions of Pinocchio, one with marionettes, created by my father, and one with rod puppets created by Allan Stevens. The latter version will be part of the current season, along with a music series consisting of Peter and the Wolf, Mozart’s The Magic Flute, and The Nutcracker.  Guest artist Christopher Hudert of Applause Unlimited will perform Tales of Beatrix Potter

Here’s our complete schedule through June 2012.