Give me a great rendition of “It’s the Hard Knock Life” and I’m a happy camper. The musical Annie, presented by the Rockville Musical Theatre did just that and much more. We all know the story of Little Orphan Annie. A poor little girl, whose mother and father left her on the steps of an orphanage in New York City during the Depression never to return, gets adopted by a rich man. It’s a story that’s been told over and over again, but in Director Eric S. Scerbo’s hands, Annie is a stunning production. 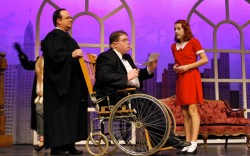 Maya Brettell presents a solid performance as Annie. She has strong, confident voice that resonates with power and assuredness. She plays Annie with maturity and a hint of longing. Anyone who portrays Annie would have to be an effective and compelling actress. Brettell certainly holds her own in the title role.

Liz Weber’s Mrs. Hannigan is the show stopper. From the moment she hits the stage, wobbling with the dazed look of a functioning alcoholic, Weber has the audience in the palm of her hand. With quips like, “Why any kid would want to be an orphan, I’ll never know,” Weber gives the kind of comic relief reminiscent of Lucille Ball. I laughed, loudly, at her antics.

Mrs. Hannigan’s brother Rooster (Rich Shegogue) is another treat. He slithers across the stage like a snake, slick and ready for the next hustle. When they break into “Easy Street”, I would have started singing along had I known the words.

The songs in this musical are, of course quite familiar. “It’s the Hard Knock Life” performed by Annie and her friends, little girls who are also orphans, with pillows, brooms and mop buckets in hands, was a nostalgic treat. The child actresses in the show are all talented, but Maya Gensler, who plays Molly, is the highlight of the bunch. Adorable and cute as a button, Gensler is the tiniest of the girls, but has the biggest stage presence. Her Molly is a charmer, grins with light in her eyes, sings with a bucket over her head, and even hides in a laundry basket. I missed her when she wasn’t on the stage. Acting could be in this kid’s future.

The musical number “Tomorrow” gives Brettell another moment to shine and she does. She sings this song with a hint of sadness, but hope and optimism as well. This time, I sang along, low and off-key, but I was singing nonetheless, a clear testament to how great the show was.

The set is extensive and constantly changes, which is expected for a musical of this caliber. There are several scene changes as Annie goes from the orphanage to the street, back to the orphanage, to Warbucks’s mansion and even the White House. When Annie interacts with hobos in Hooverville, we can envision a street littered with trash behind the barrels, make shift stove and boarded windows. The Warbucks mansion has an oak staircase on one side and an office desk on the other with paintings lining the walls.

“Something was Missing” performed with heartfelt emotion by Mark Hidalgo’s Daddy Warbucks. The scene with President Roosevelt at the White House also feels forced. The White House staff appears rigid and uncomfortable in the scene. Stephen Yednock’s Roosevelt is effective, but not overly done. He shares in Annie’s enthusiasm, because he is trying to save a country from the depression era.  Annie’s cheerful outlook on life and her refusal to believe tomorrow won’t be better – is the highlight of this scene.

I had a blast watching the performances. Why are you still reading this? Get your tickets now!