Stephen J Productions’ Caught in Dante’s Fifth… has plenty of full-frontal male nudity and tossing around of the ‘N’ word in it but, strangely, it is neither titillating nor edgy. This slapdash, pedantic rant, delivered by Jameson Freeman as a frog reincarnated as a naked, androgynous man, which attempts to take us through the jungles of Costa Rica, the Serengeti Plains and the streets of D.C., goes nowhere. Mediombo Fofana has been miscast as a gangsta guru and Vonette Mewford opens the play with some pointless lipsynching. On the bright side, Jameson Freeman is, to borrow a term from his character’s lexicon, fine. 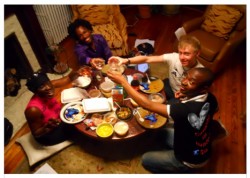 Caught in Dante’s Fifth: The Naked Truth of Kindred Spirits information and tickets.