Fifteen months ago, DC’s Woolly Mammoth Theatre Company was one of the first to commit to producing playwright Bruce Norris’s script that focuses on the juxtaposition of racial issues in America during the 1950s and the present day. This year, it won the Pulitzer Prize, and has returned to the same theater featuring the exact same cast for a three-week reprisal. And what a cast it is – filled with Woolly favorites and regulars Kimberly Gilbert, Jennifer Mendenhall, Mitchell Hébert, and Dawn Ursula. They are joined by actors extraordinaire Cody Nickell, Chris Dinolfo, Michael Glenn, and Jefferson A. Russell. It’s ensemble acting at its best – simply heavenly. 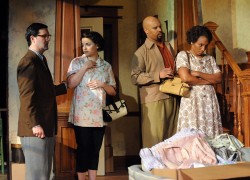 Directly inspired by the landmark 1960s drama A Raisin in the Sun, in which a black family attempts to move into an all-white suburban neighborhood called Clybourne Park, the first half of Norris’s play focuses on the white family about to move out of their home to make way for the black family. The second half flash-forwards to 2009, long after the neighborhood had become an all-black community, and a white family is looking to buy the exact same house (now run-down), to tear it down and build a new one.

Though various characters’ conflicting attitudes toward race relations come to the forefront (especially during the second half), the play as a whole is less about racism than it is about how cumbersome it can be to have a frank and honest conversation about race, even among those who are otherwise completely open-minded and wholly unbigoted. And concerning the case of why the white family chooses to leave Clybourne Park in the first place, Norris’s script does well to illustrate the hypocrisy sometimes inherent in championing one set of “community values” over another.

To provide for an even further dialogue with its audiences outside of just the play, Woolly Mammoth organizers have scheduled various noted speakers to host post-show conversations about the play and the themes contained within.

Truth be told, there isn’t a single flaw to be found in this reprisal production. You couldn’t ask for more out of what this show’s designers have been able to accomplish with Woolly’s stage space. The two-story house all the action takes place in looks like it could double as a TV or movie set, and each single member of the cast shines in their respective roles.

Truly deserving of all its recent accolades, this play’s script has more than a good chance of becoming required reading in college-level literature classes for decades to come. So get yourself down to Woolly Mammoth Theatre Company while there’s still time to see this play performed live with production values as impressive as these are.

Running time: Two hours and 15 minutes, with one intermission.