Curtains at The Fredericktowne Players

Spoiler Alert: if you thought that Kander and Ebb’s score for Curtains was saccharine and unmemorable based on the original Broadway cast CD, you will be pleased to know that the show is 150% better in full performance. This is thanks to an extremely well-crafted book by mystery veteran Rupert Holmes, and the fine production that is being presented by The Fredericktowne Players of Frederick, MD.

The story revolves around a string of murders within a Boston theatre company that is mounting an ill-advised Western style musicalization of Robin Hood (it’s sort of like Oklahoma! and Showboat thrown into a blender). Enter Lt. Frank Cioffi (Rich Cole): a mild-mannered police detective with amateur theatrical aspirations who sets about to solve the mystery of the murders and the problems plaguing the new musical in one fell swoop. 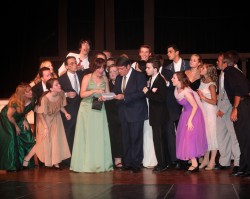 Curtains demands a talented group of actors to fill a large ensemble of principal roles, and the Frederick community has certainly provided that talent. Rich Cole anchors the show as Cioffi with sincerity and a soft-spoken charm. Whatever quality Angela Lansbury brought to Murder She Wrote – you know, that rare combination of badass detective and nice lady you really want to have a cup of tea with – Cole captures the male equivalent of that. Equally outstanding is co-star Karen Plummer as theatre producer ‘Carmen Bernstein.’ She commands the stage with a classic Broadway star quality, and I hope to see her again in iconic roles like ‘Dolly Levi’ and ‘Mamma Rose.’

Directors Laurie Newton and Fornwalt ensure that most characters are portrayed with multi-dimensional honesty, and they do very fine work of digging into the rich layers of the mystery. Newton’s choreography is sophisticated, but doesn’t always flatter the abilities of the dancers – it seemed incongruent that wannabe starlet Bambi Bernet (adorable Kelsey Swann) was the clear standout dancer of the company, though perhaps that was the intention given the eventual revelation of one of the plot mysteries (which I dare not disclose, as we were issued a post-curtain call musical threat from the cast).

Fornwalt’s set is simple, yet innovative, transforming into a showboat at one moment, and the backdrop for a flashlight ballet at another. Music Director Catherine Porter-Borden leads an impressive 12 piece orchestra. One of the most fascinating elements of the production was the placement of orchestra players in at least two different locations on stage (and I still can’t figure out where the drummer was hiding). What Kander and Ebb lacked in memorability, they compensated for in lush orchestral arrangement to mimic the big sound of classic Broadway musicals. It is no easy score to perform, and Porter-Borden more than capably handles the vocal and orchestral direction.

My verdict: Skip the cast recording and see a terrific production of Curtains by the Fredericktowne Players while you can!

Curtains is playing through July 31st at The Fredericktowne Players at Jack B. Kussmaul Theatre at Frederick Community College – 7932 Opussumtown Pike, in Frederick, MD. To purchase tickets, call (240) 315-3855, or order online.

The running time of the show is approximately 2 and 1/2 hours, including a 15-minute intermission.